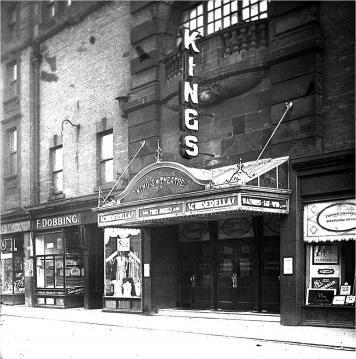 The King’s Theatre was opened on 24th December 1906 with the Christmas Pantomime “Little Red Riding Hood”. It originally had a seating capacity for 2,300, with circle, balcony and galley seating levels designed on a cantilever system, rather than having supporting pillars. It was built for and operated by two Scotsmen, Ernest Stevens & Robbie Buchanan, who operated sixteen theatres in Scotland.

The King’s Theatre was a popular playhouse theatre, but showed its first film in 1913, and it was taken over by cinema operator George Black in 1918 and re-named Black’s Theatre. He installed a Vincent 3 Manual 26 Ranks straight organ, which was opened by organist David Clegg. Later it became part of the Thompson & Collins circuit, reverting back to the King’s Theatre name. In March 1928 it was taken over by the Denman/Gaumont British Theatres chain. They had the organ rebuilt by William Sewell to become a 3 Manual 29 Ranks organ. On 6th January 1930, the King’s Theatre screened its first ‘talkie’ “Behind the Curtain” starring Warner Baxter. It had been equipped with a RCA sound system.

The King’s Theatre was destroyed by German bombs on 16th May 1943. The films showing that week were “Rookies” starring Abbott & Costello and “"When Johnny Comes Marching Home”. The remaining walls were converted into a market in 1947, and it was totally demolished in 1954.

Today the Crowtree Leisure Centre stands on the site, as well at the site of the nearby Palace Theatre on High Street West.