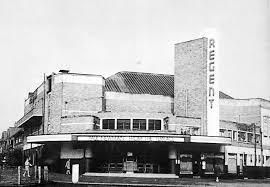 Located in the Grangetown district of Sunderland, at the corner of Ryhope Road and Queen Alexandra Road. The Regent Cinema opened on 31st May 1937 with Jeanette MacDonald in “Rose Marie”. With its corner entrance and tall vertical fin tower containing the theatre name, it was considered one of the best cinemas in Sunderland, and certainly the best in the suburbs. All seating was on a single floor.

Thompson’s Enterprises operated the Regent Cinema, which was closed on 3rd June 1961 with Howard Keel in “The Big Fisherman”. The building was demolished and a Kwik-Save supermarket was built on the site, which in 2013 is in use as a Global Fitness gymnasium.