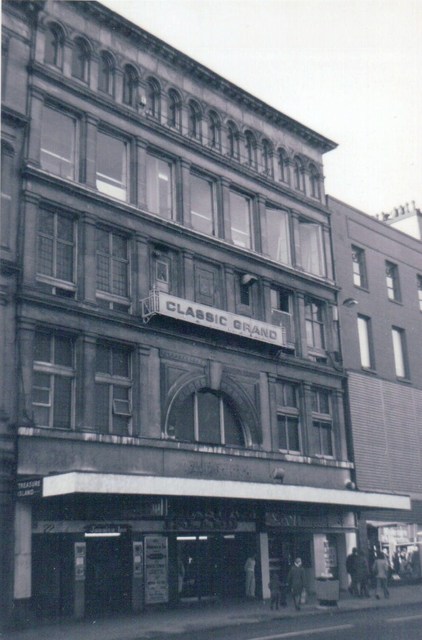 In Glasgow city centre, the second and third floors of a fine Venetian style warehouse were converted into the Grand Central Cinema, which opened on 9th August 1915. The simply decorated but spacious 750 seat auditorium had a horseshoe-shaped balcony and its excellent sightlines ensured its popularity. In the early days the cinema had an orchestra, and later on it was the first to show De Forest talking films. In the 1950’s it showed ‘specialised’ films, mainly sexploitation and horror, but it closed in the mid-1960’s.

It lay derelict from 1966 to 1973, when it was purchased by Classic Cinemas and re-opened as the Classic-Grand Cinema. A new, stalls only luxury auditorium with curtained walls and suspended ceiling was built within the existing shell and initially family-oriented double features were shown. But these met with a poor response and the cinema reverted to its previous ‘artistic’ policy. It was sold with other Classic Cinemas to the Cannon Group in 1985 and renamed the Cannon-Grand Cinema. It lingered on until 4th May 1992. In 1996 the auditorium was reported to be unused and becoming derelict. By December 1998, when my photograph was taken, the building was occupied by Penelopes nightclub and Las Vegas amusements. The building suffered a fire in 2001. By 2013 it had become a nightclub/live music venue named Classic Grand.

The Classic Grand building is Listed Grade B

A more recent photo of the exterior:–