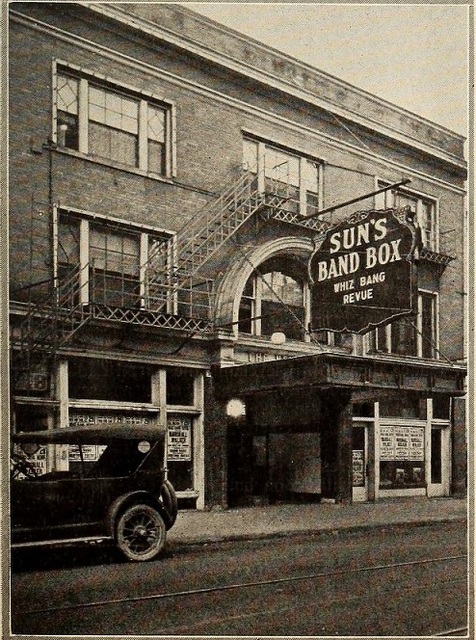 This house opened on November 24, 1907, as the New Sun Theatre. It was built by Gus Sun. Sun had arrived in Springfield in October, 1904, as head of a troupe of minstrels, and later that month opened the Little Orpheum Theatre in the Fisher Building. This was the beginning of the Sun Circuit, which would grow to an extensive chain. Sun maintained his headquarters in Springfield, though the circuit had a booking office in New York City.

Before the New Sun Theatre was built, Gus Sun had formed a partnership with O. G. Murray, a broker from Richmond, Indiana. By 1908, the firm of Sun & Murray controlled ten vaudeville houses in Ohio and Indiana, and the circuit would eventually grow to some 275 houses.

When Sun’s Regent Theatre opened in 1920, it became the chain’s flagship house. I haven’t found the year the New Sun was renamed the Band Box, but it was probably around the time the Regent opened.

I’ve found a photo of the New Sun Theatre (this page, center right), and it was in a three story building on the northwest corner of Main and Center Streets. I don’t think the two story Ohio Theatre in the vintage photo we currently display is the one in Springfield.

A book called Springfield, Ohio: A Summary of Two Centuries, by Tom Dunham, says that, in the 1950s, Springfield Civic Theatre “…leased the old vaudeville theatre at Main and Center streets, but it was condemned as unsafe.” In the later 1950s the company purchased a house on Main Street which it converted into a theater.

If the Ohio was condemned in the late 1950s then there’s no chance that it was the theater in our vintage photo, which displays on its marquee the 1963 film To Russia With Love and the 1965 film Thunderball.

Center Street is the dividing line for east-west addresses in Springfield, and the New Sun was on the northwest corner of Center and Main, fronting on Main, so its lot was probably numbered 100-102-104. I’m sure the address is correct.

The Ohio Theatre in the photo is still standing. I’ve just discovered that it is the house now called the Renaissance Theatre, located in Mansfield, Ohio.

Actually, Fountain Ave is the E-W dividing line. The first block East and West is 1-99, then 100s in the second block. The 1955 map shows this as the Civic Theatre. It’s not clear whether that’s a name or function, but the ‘Movie’ note from the 1928 map has disappeared. It looks like it had stage and scenery until the end. This is another block that was completely destroyed due to neglect and the collapse of Springfield’s economy and downtown. By at least 2007, the whole thing was a vacant lot, but there is now a hospital and ocean of parking covering it.