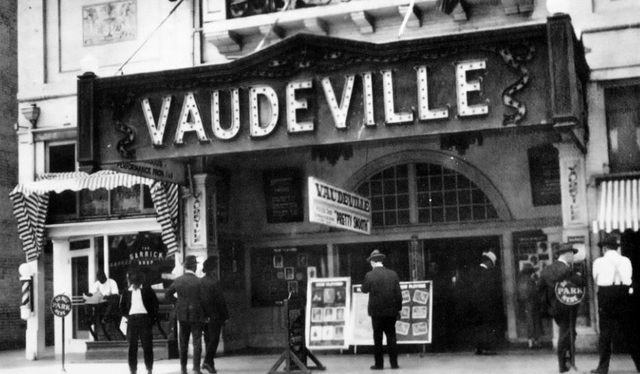 A theatre with many name changes. Opened in 1904 as the Unique Theatre. Later becoming the Empire Theatre, then Aliskey Theatre, then Forrest Theatre.

It was renamed Garrick Theatre on June 10, 1907 and retained that name until 1915. It then became the Strand Theatre, and finally the Hippodrome Theatre.

The photos show two different buildings. The Stockton theaters page has three listings for houses at 21 Sutter, two with one of the photos and one with the other photos.

The round-cornered building is listed as the Aliskey Theatre, with the aka’s Empire, Unique, Forrest, and Garrick, with the address 21 N. Sutter.

The same photo then accompanies the listing for the Garrick Theatre, with the aka’s Strand and Hippodrome, but with the address 21 S. Sutter instead of 21 N. Sutter.

The building with VAUDEVILLE on the marquee is then listed as the Hippodrome with the aka’s Unique and Garrick, and with the address 21 S. Sutter in the heading and 21 N. Sutter in the text.

The VAUDEVILLE building is mid-block, next to an alley, so the address 21 makes sense, but the theater entrance in the round-cornered building is very close to the corner, so I would expect it to have either a higher or a lower number. I think that’s the building the Stockton theaters page misidentified. The address was probably misidentified, and the theater names might have been as well. Too bad the scan is so blurry that the theater’s name is unreadable.

I’m pretty sure the address 21 N. Sutter is correct for the VAUDEVILLE building. It was probably almost directly across the street from the old Kress store which is still standing at 20 N. Sutter. The building now on the site looks to have been built in the 1920s. The alley was probably closed off to accommodate that building’s extra width.

I’m still trying to figure out where the round-cornered building was, and what theater(s) occupied it.