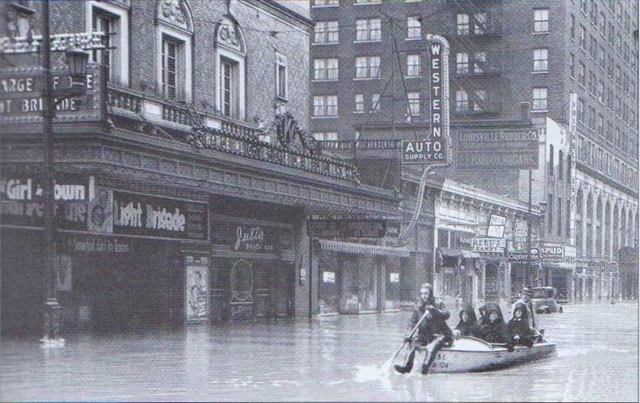 A 1940 remodeling increased seating from 780 to 1,100 by the addition of a balcony. The theater’s color scheme and decor was also changed at this time.

In 1984 it became home for a multimedia slide presentation promoting Kentucky tourism, but the show was short-lived and in 1986 the building closed. Ten years later the City of Louisville marked the abandoned building for demolition.

Local entrepreneur George Stinson bought the historic theater at auction to save it from the wrecking ball and in 1998 gave a no-cost lease to a band of volunteers who created a non-profit arts organization, called the Kentucky Theater Project, Inc. Since that time, organization founders worked with more than 200 volunteers to transform the Kentucky Theater into a vibrant community arts center that was due to bring new life to Fourth Street.

In 2008, the Kentucky Theatre was revamped into an upscale gourmet food mart, known as the Theater Square Marketplace.

Since this theater is listed as a playhouse I wonder if films are shown on its stage? And thanks to George Stinson for saving this theatre from that wrecking ball.

Here is my picture from November 2010. Someone had the bright idea to remove the marquee. Oh well, at least it’s being occupied by something.

Thanks for the photo Andy.

Whoever was responsible for the re-purposing of this building insured that nothing was left to indicate that this ever was a theater; the interior was completely gutted and all the exterior trappings as well leaving a rather bland, brick, building.