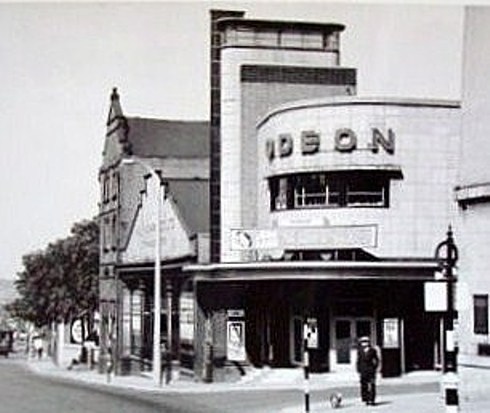 Located in the Stoke-on-Trent potteries town of Hanley, Staffordshire. Built on the site of the Grand Theatre (1898-1932, designed by Frank Matcham). The Odeon was one of the original cinemas in the Oscar Deutsch chain of Odeon Theatres Ltd. It was opened on 13th February 1938 with Max Miller in “Educated Evans”. It had a very small entrance at the corner of Trinity Street and Foundry Street, with a slender fin tower on the left side, and clad in cream faience tiles. The bulk of the auditorium was along Foundry Street, and seating was provided for 1,036 in the stalls and 544 in the circle. Decoration was in a typical Odeon style, with several troughs across the ceiling containing concealed lighting.

The Odeon was closed by the Rank Organisation on 15th November 1975 with Roger Daltry in “Tommy”. The auditorium decoration was stripped out in the early-1980’s, and by 1982 it was used for storage, when on 4th August 1982, it was partially damaged in a fire, although the main shell of the building was not damaged. By 1991, the building was standing derelict.

By 1999, a bar was operating in the former foyer area. By 2003, the former auditorium had been brought back to use as a Chicago Rock Café. In 2008, the building had become a bar & nightclub named Revolution, with the former foyer in use as a bar named The Base.

In December 2021 plans were announced to demolish part (possibly the auditorium?) of the former Odeon Theatre to build flats.

I have the 2 Philips DP70 Todd-AO Projectors from this cinema.

In March, 1954, the Odeon was chosen to present the North Midlands Premiere of the first film in CinemaScope, THE ROBE. Equipment costing thousands of pounds was installed there for the presentation of CinemaScope films complete with a wide screen with moveable masking and four-track magnetic stereophonic sound. As the Odeon didn’t close for this installation, it must have been done at night over several nights and in the mornings and a three weeks long engagement of the film began on Monday, March 8th, 1954. The next landmark in the history of the Odeon occurred some five years later when it closed for two weeks for the installation of an even bigger wide screen and equipment for the showing of 70mm Todd-AO films. The opening presentation of the newly installed system being SOUTH PACIFIC, which opened on Monday, July 13th, 1959, and ran for an incredible seventeen weeks. However, the Odeon’s biggest hit was THE SOUND OF MUSIC, which opened in 70mm on Boxing Day, 1965 and ran for an even more incredible 46 weeks!

Plans have been submitted to ‘partially demolish’ the former Odeon, and for flats to be built on the site :-(