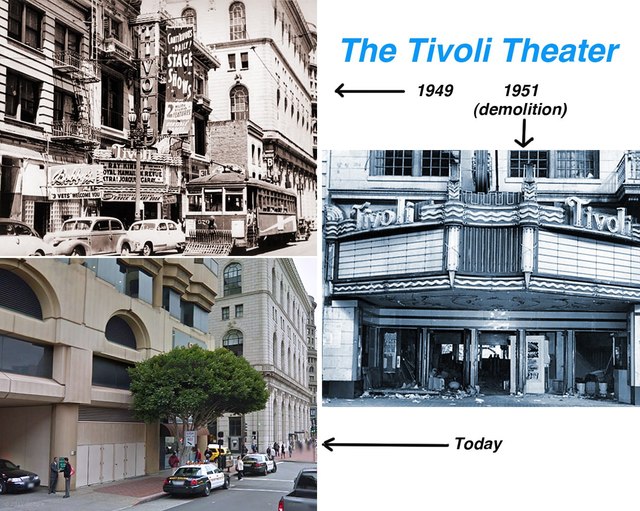 The Tivoli Theatre was opened in 1913 as a legitimate theatre. In later years, it went over to movies, and was latterly operated by Blumenfeld Theatres.

The Tivoli Theatre opened on 12th March 1913. The architects were Werner and O'Brien and the seating capacity quoted at opening was for 1,500.

End of the road:

The Tivoli sometimes, ran the same movies as the Esquire. Several times when i bought tickets at the Esquire Box Office, an usher directed mne, and others through a passageway and into the Tivoli. This, as I recall, was in the mid 40’s

Ken, this would have been the San Francisco Tivoli. Blumenfeld operated it all during the 40’s till it’s demolition (which was in two parts. The auditorium went down in the early fifties to become a parking lot, but the office structure stood until the early sixties). The office part contained a large street level bar and a famous second floor after hours-club (Coffee Don’s).

I’m trying to find more information about a house called the Ferris Harriman Theatre, which was located very near the Tivoli. It was built in 1911 in conjunction with a hotel of the same name. The hotel was renamed the Ambassador in 1922, and is still standing today at 55 Mason Street. The theater was converted into a garage in 1929. I’ve been unable to discover whether or not the theater ever operated as a movie house, or if its name was ever changed; neither do I know its address, or if the garage it became is still standing.

Does anybody know? Bueller? Tillmany?

The Tivoli Opera House, Eddy Street near Market, advertised in the December 27, 1913, issue of the San Francisco Call that it presented “Photo Plays De Luxe”. The offering for the coming week was Sold to Satan (“The Most Unique Motion Picture of the Day”) and a Keystone Comedy, The Champion Driver, starring Mabel Norman [sic]. Despite the fact that it billed itself as an opera house, the Tivoli appears to have been a movie theater from its early days.

Here is a photo of the Tivoli Theatre dated 1917.