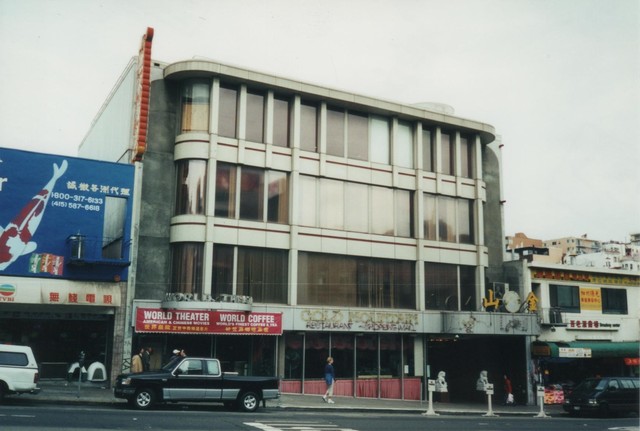 This World Theater opened on July 3, 1985 replacing the former Royal/Verdi/World Theatre (which has its own page on Cinema Treasures). It screened Chinese movies and operated for fifteen years.

One thing that must be inquired—-is this supposedly the listing for the “later” World Theatre? If so, then some of the above comments actually pertain not to this theater but to the original World Theatre, listed in Cinema Treasures as the VERDI (possibly to avoid confusion with this World), and which was torn down to make way for the mixed-use office building of which this theater was/is a part, and, as noted by Tillmany in the Verdi listing, the World listed here operated for another fifteen years before itself closing. Moreover, this World was known ONLY as the World, never by any other name.

I think you’re right- from what I can tell looking at the entries, there appear to be three theaters here ultimately called “World”– theCalifornia (1909)/Liberty (1911)/Allies (~1918)/Crescent (~1922)/Liberty (1926)/World (~1949-1953), the Palace/Royal Palace/Royal/Verdi/World(1954-1982), and the 1983-1990s World, this entry. The comments and description from this should probably be moved to the Palace entry, the California needs an address, and this entry should probably be clarified that it refers to the World in the office building

The more recent World is now home to a restaurant, church and dentist, among others.

This opened on July 3rd, 1985 as the world’s largest theatre to showcase films from the People’s Republic of China. Grand opening ad in the photo section.