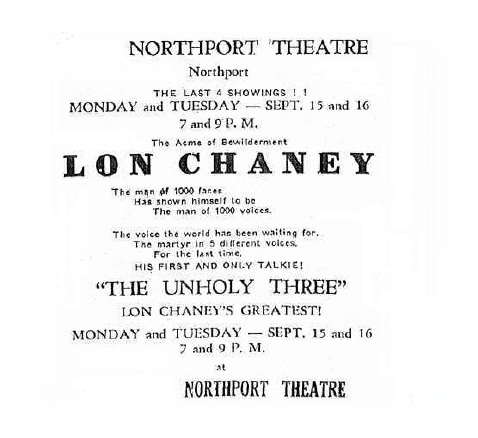 Instead of waiting for the remains of this building to be demolished, construction of the current Northport Theatre (now John W. Engeman Theater) began immediately on an adjacent lot at 250 Main Street. (It has its own page on Cinema Treasures)

According to an article in the Sunday July 18, 2014 Newsday on the history of theatre in Northport, N.Y., the original Northport Theatre hosted vaudeville acts and was used as a community center for recitals, commencements and roller skating (the seats were removable). In 1918 the soldiers training to become World War I pilots at Brindley Field were entertained here.

In the 1920s it was only opened on weekends. In 1930 talkies were initiated. Two years later it burnt to the ground.

Addendum: in the spring/summer of 1975 me and a friend went there hoping to catch Monty Python and the Holy Grail (rated PG) but the co-feature was The Heartbreak Kid (a movie we had NO interest in whatsoever). It was rated R. So the box office lady said we could not get in because we were only about 15/16 at the time. We were bummed out !

The theater was modest but almost felt like a “movie palace Jr.” sort of. One very unusual feature was that, there was a big open partition in the back wall (no exit/entrance doors). So if you went to the lobby/ conscession stand with your head towards the screen you probably would not miss much of the movie. Not sure what the purpose of this was. Also, noise from the lobby would have been awful if you were sitting in the back row of the theater.

Bloop you’re on the wrong Northport. How about moving all this information to the later Northport, also on CT, which is now a performance space known as the John Engeman.

THANK goodness this mess was fixed..however too too late now. This was a decades old neighborhood movie theater – walkable from HUNDREDS of homes locally. This thread SHOULD HAVE hundreds of comments- alas, the confusion with the current “performance space” (that has NOTHING to do with “cinema”) messed things up from the get go on here. Sad. The most important thing that happened to me in this theater, Spring 1979: was there to see the Ralph Bakshi animated “Lord of the Rings” (almost unwatchable , headache inducing) and before the film started the trailer….for….George A. Romero’s “Dawn of the Dead” ! The movie that changed my life and the movie that made me RENT it on VHS like 50 times (50 x $2.99 = ????? D'oh!) all through the VHS 1980s. Sadly I did not see “Dawn…” at Northport, rather I took my business to the Commack Drive In.