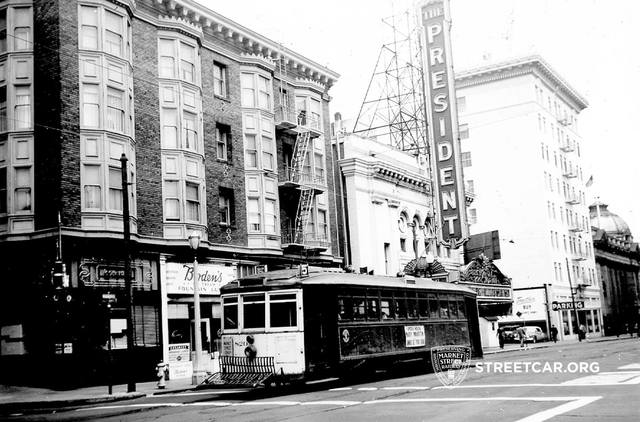 The Colonial Theatre was opened October 6, 1906. In 1959, the President Follies Theatre was operating as one of the last real ‘Strip Tease’ parlours. It had a live three-piece band. It was not like any of the nude dancing or lap dancing parlours of today, but featured real strip tease, and was great place for college boys to hang out.

I am the surviving daughter of Eddie Skolak who owned the theater from the 1940’s till his death in 1960. My mother who was the surviving widow and ran it till 1963 (Cathy) is still alive as of this date. She is living on the San Mateo Coast. I have little bits of info. since I had been around ‘the theater’ (as we called it) from birth till age 16. The theater was bought by St. Boniface Church who boardered it on Golden Gate Ave. They had been after that property for yrs. saying that they wanted it to expand their school, I was told by my mother. My father fancied himself as another Flo Ziegfeld but never reached the heights that Mr. Ziegfeld (sic).did. My father moved out to SF from Chicago Il. where he was born in 1901. ‘The Theater’ was a problem for me growing up since the business sort of clashed with the Catholic Church. I attended Perochial School for eight yrs. and I was always treated sort of different by them because of it. I do not approve of the business but the actual theater was really something. I was pretty sad that it was never salvaged by some sort of historical group in SF to preserve it and maybe put in respectable plays, etc. I think that if it had been upgraded and refurbished it would have been really something to see. There was beautiful/ornate structural artistry to it. My father and mother had told me that it withstood the 1906 earthquake and fire but I really do not have any historical proof of that. When my mother sold much of the artwork from the inside of it before sale of the theater, there were some very valuable paintings and mirrors. It must have been a somewhat classy theater in it’s beginning.

I used to go to the President Follies back in 1962-63 with my guitar teacher, the great Warren Nunes, who played in the band. I’m sure the band was at least 4 or 5 pieces at that time. The leader was an ancient piano player, Charlie who didn’t like my being there. I was only 19, but Warren would sneak me in to see the shows and I’d sometimes go backstage, where the strippers would be sitting around with barely anything on, reading books, playing cards, bored, waiting to go on. They also showed old movies and featured vaudeville comedians as well. The only stripper’s name I can remember was Bobette. When the President Follies closed, the owner Cathy Carver threw a party at her home in South San Francisco, which I attended with Warren. It seems to me that Cathy sang onstage there too, because I remember her giving Warren the recording of “Detroit City,” which was hugely popular, for him to learn so he could accompany her.

The AKA list for this theater indicates that it was once known as the Oriental; here is a picture of an Oriental Theater in San Francisco from 1919.

Used to see Cathy Carver sing at the Follies many times in the early 60’s. Her specialty was Country & Western songs and she was quite good. Cathy was very attractive, blond, medium height and in her mid to late 20’s if my memory is correct.

As the daughter of Eddie Skolak I last commented here in June of 2011. At that time I mentioned that my mother Cathy Carver Skolak was living on the San Mateo Coast. Sadly she passed away 2/21/15 a week after her birthday. I had the privledge of being with her when she passed. One of my daughters was able to come and help me with the final arrangements. She is interned at next to my father at Cypress Lawn in Colma Ca. At the actual Service for her at least two of her grandchildren were able to be there to attend along with a surviving brother and two clost family friends from OR. I just wanted to say that with the passing of both of my parents, a lot of history of those early yrs. of the President Theater is done. Unless some others have more stories. I have given all the info. that I know of of which I wish I had listened more when I was a young girl.

The Colonial Theatre was under construction, and probably fairly near completion, at the time of the Earthquake of April 18, 1906. Construction had begun in 1905, and the year was engraved in stone below the cornice above the entrance.

There is no historic record indicating that the theater had actually opened before the disaster. Like many other substantial buildings in the downtown area the structure was gutted by the subsequent fire, but it was restored, and the Colonial Theatre finally opened on October 6, 1906.

The house became the Plaza Theatre in 1922, when it was taken over by a repertory company that grew out of Berkeley’s Greek Theatre Players. I don’t know how long it remained the Plaza, but the name was in use at least into 1923. The theater had never had much success either as a legitimate venue or as a movie house, and changed hands frequently until it finally found its niche as a burlesque house.

It is very likely that Reid Brothers were the original architects of the building as well as of the 1919 renovations.

I used to go to the President Follies from 1955 to1957 when I was in the Air Force at Travis AFB. At the time I was 17 and 18 and had seen my first Burlesque show in Los Angeles. It was during my induction into the AF and that evening I saw Tempest Storm in the Burlesque theater on 3rd street downtown LA. At 17 in 1955 I had never seen anything like that before. In trips into San Francisco I discovered the President Follies and I might have gone there maybe a dozen times over the next few years. Back in those days I was mostly interested in seeing the girls and the President had, if I remember right, a stripper then a comedy skit, then a stripper and so on until the headline act. I seemed to suffer through those comedy routines. Years later I would remember some of them and wish that I had payed more attention since I think they were the last of true vaudeville spicy comedy acts. Always had the busty blond and a duo male/female or male/male with sexual gestures and dialog ending in the punch line pa bump bump from the drummer. The band was 3-4 members in the pit for music. At the President if the pasties came off it meant a more relaxed political attitude at with city hall. If things were tightening up then the pasties stayed on. Mostly smaller crowds when I went and it seemed to me more military types. I still think it was a great time in my youth. Things certainly when down hill in the 60s in North Beach when the topless and Bottomless took over.

December 12th, 1909 grand opening ad as Savoy can be found in the photo section.

Also uploaded the ad for the Colonial.

There is a SomthingweirdDotCom video of a beautiful brunette stripper named Nikkie Joy on YouTube, where the intro is “Now, From San Francisco’s President Theatre here’s Nikkie Joy……”. I’ve found the theatre here, but can’t find a thing on her. If she’s representative of the ladies who worked there it must have been a very classy place!