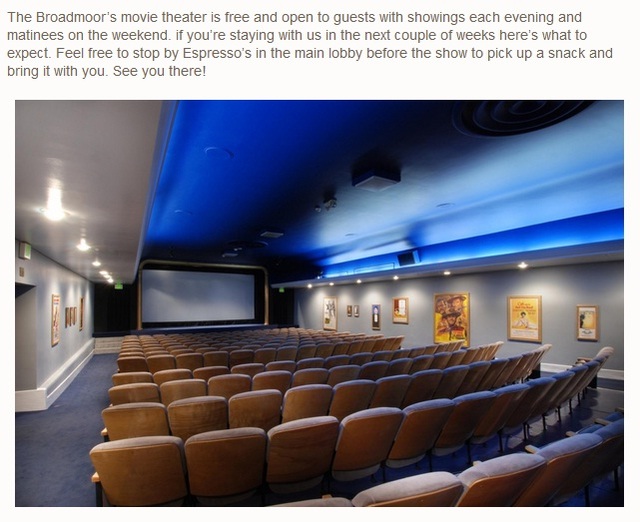 The Broadmoor Theatre was located in the hotel of the same name and opened in 1918. It holds 314 persons. By 1960 was operated by Westland Theatres and later by United Artists Theatres. Admission is free to guests of the hotel.

The Broadmoor Little Theatre-this theatre’s official name dating back to the resort and theatre’s 1918 opening-is NOT closed. I cannot say it never has been (in reference to the closed in 2001 statement) but as of right now, it is alive and well screening second run and classic films (free admission) for hotel guests and members as well as being used for occasional live events. It is listed in the FDY of 1928 as seating 300. In the mid to late 1990s, the booth equipment was “upgraded” and the pair of Simplex E7 projectors (with carbon arc lamphouses) that were being torn out and disposed of ended up being donated to The Rialto Theatre in Loveland. They sat dormant there for a few years up in the booth while the Rialto Theatre Guild raised funds for their restoration. Once these funds were raised, the carbon arc lamp houses and original pedestals were replaced with 2 fairly modern consoles which the original magazines/projector heads/sound heads were attached to. These were still in the Rialto booth as of 2012 and I’d be a bit surprised if they were not still. I ran and maintained these machines at the Rialto for many years. Some interesting trivia that any other former operators reading this will find interesting is that the upper magazines had BOTH common reel end alarms installed and active-both the centrifugal alarms at the end of the shaft that once the upper reel started spinning at a certain speed, it would sound three “dings” in rapid succession as well as the older one in which an arm rode along the top of the film on the reel and once the remaining film ran down to a certain point, the arm would drop and ring a bell on the outside of the magazine giving of one loud “plink”. Anyway, (back to the Broadmore Little Theatre) I am almost positive that these machines were replaced with modern 35mm gear and I seem to remember a friend of mine from Tankersley Enterprises commenting about the projectionist being a very elderly man who’d been the Broadmoor projectionist for decades and that the booth was one that was tricky to access (only by ladder) but these last two tidbits may be wrong. Also, what is the sources for information that leads CC44 to believe that it was operated by Westland and the United Artists (or any circuit/commercial operator,for that matter)? I don’t have a lot of history on this theatre to really debate this statement however it seems odd to me that the hotel would outsource the operation of one of their resort amenities and I truly can’t see how the operation of a 300 seat, single screen theatre within the main hotel building of a luxury resort (that exists in a city that has been filled with every variety of motion picture theatre imaginable since the turn of the last century) would be of any interest to any for-profit operator. Additionally, I can’t imagine any 5-star resort permitting, let alone encouraging, the general public to come to their establishment on a regular basis simply to attend a movie, nor can I imagine the public wishing to forgo all other local theatres and trek out to the resort to watch an ordinary film. Again, I have no facts to back my sentiments up; all I know on this end is that the theatre has, throughout time, opened the theatre up to the general public for a number of specific special events/shows and I also know that their website currently states: “Movies are shown in the Little Theatre. All movies are subject to change. Movies are complimentary for Guests & Members. Matinee Showings are 12:00pm on Saturdays & 2:00pm on Sundays.”

Does this mean that non members/guests are permitted (perhaps with paid admission)? Have regular film screenings historically been for guests/members only? This I don’t know. Assuming, however, that the general public has never been welcome to such screenings and that they have always extended these free screenings to guests, (which wouldn’t surprise me in the least), this almost certainly would make such a venue out of consideration for any commercial operator.i also would be curious to know where the stated 1960 opening year came from as the theatre was opened with the hotel in 1918.

Is there any chance that there was another regular theatre in the city called The Broadmoor?

I hope someone comes forward with some solid facts as this is an extremely interesting theatre in a number of different ways.

I only live about 2 ½ hours from the Broadmoor and certainly will try to get in there to take some photos and perhaps even gather some history, if I can locate a knowledgable source. With that said, my list of research projects is miles long, not to mention the endless amount of “things to do” in my real life/career so I can’t say how quickly I can get to this.

All rambling/guessing/reminiscing aside, here is a summary of the facts I know:

Wow – I had forgotten about this place!

To answer Anthony’s question above, yes, this theater used to be open to the public. Admission was about half a standard theater. I think it tended towards second-run and some art house fare, since there wasn’t really a local art house (other than Poor Richard’s, which was a bookstore downtown, but showed movies on a regular basis). This theater was small, tucked behind the main lobby in the original building. I remember seeing AMADEUS there when it debuted in the early 80’s, as well as A LITTLE ROMANCE.

The Broadmoor used to be very open to the surrounding community. We would walk the lake and feed the ducks often, and have dinner or brunch on a regular basis. It was practically my playground for a number of years when my sisters were figure skating at the World Arena in the early 70’s (where they filmed ICE CASTLES). Later I heard the resort put up a lot of fences and made it much more a private space, which gibes with the theatre showing classics and making it free to hotel guests nowadays.

The Broadmoor in the days before they didn’t just let anyone in was open to the public. The theater was operated by Westland in the 60s. Employees got in for free.

I was there in May of 1988 and saw “Dominic and Eugene.” Wonderful experience! Am so glad they are still around.

Boxoffice, Oct. 16, 1948: “COLORADO SPRINGS – The Broadmoor Theatre, located in the Broadmoor hotel here, has been opened to the public. New projection and sound equipment has been installed. One performance is given nightly. The downtown price scale is in effect at the house.”