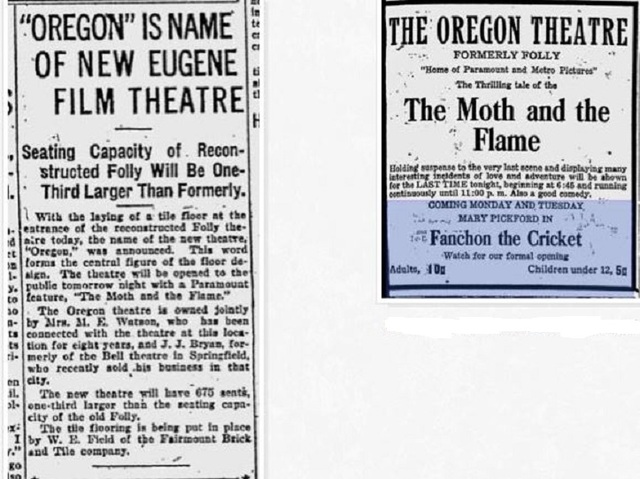 The Oregon Theatre under its original name, the Folly Theatre, was first mentioned in the Eugene Register-Guard in 1910. The Lane County Historical Society notes that the Folly Theatre was located at the southeast corner of Willamette Street & 8th Avenue in the Eugene Loan & Savings Bank building. The bank was built in 1900 and according to the Register-Guard, was designed by architect Lazarus of Portland. Mr. Lazarus’ full name, it is assumed, was Edgar Marks Lazarus, Jr. The Society has a 1910 photo of the building, before it housed the theater. (According to the Historical Society, the streets were renumbered in 1914, which would place the pre-1914 address, on the Sanborn Insurance Maps, at 561 Willamette Street).

On July 9, 1915, the former Folly Theatre was expanded and became the 675-seat Oregon Theatre. Its later history is sketchy but in 1918, after being dark for many months, it had another grand opening on July 1. In August of 1920 an advertisement announced that the theater would be closed on August 14 and be rebuilt. Evidently the theater never reopened again probably due to the opening of the Castle Theatre, a more modern theatre, on November 1. By 1925 the maps show a store at the location.

In 1960 the United States National Bank of Portland constructed a new structure to replace the old bank at 811 Willamette. According to the Sanborn Insurance Maps of 1962, a parking lot with a drive-up teller was located at the site of the former theater. In 1977 an addition to the bank took the place of the parking lot.