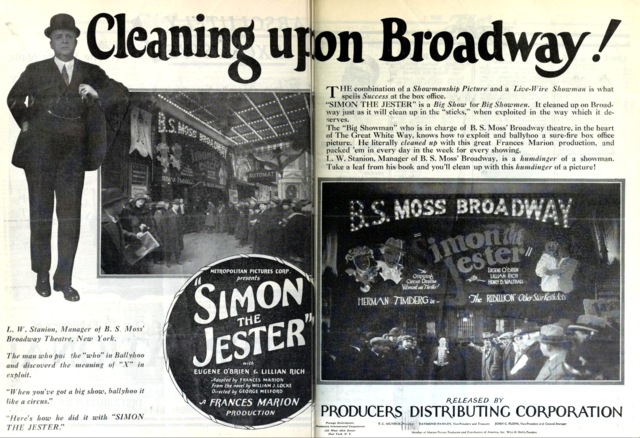 The seventh theatre to bear the name Broadway Theatre (the first was, ironically, opened in 1837 on Canal Street!), this playhouse was built in 1888 at the southwest corner of Broadway and W. 41st Street for producers Frank Sanger and T. Henry French. It opened March 3, 1888 with Sardou’s “La Tosca”. It sat around 1,700, and was decorated in a mix of Baroque Renaissance and Moorish styles, inspired by the popular Casino Theatre which opened a few years earlier at Broadway and W. 39th Street.

The Broadway Theatre was designed by the architectural firm of J.B. McElfatrick and Sons, whose later Broadway efforts included such famous houses as the Empire Theatre, Hammerstein’s Olympia Theatre and the Hudson Theatre.

The Broadway Theatre featured a somewhat generic facade on Broadway, in a five-story red brick office building with little indication of was inside, until a vertical marquee was added in the 1910’s. The elegantly decorated auditorium, with its large proscenium arch, six sets of boxes and twin balconies, featured such touches as antique copper chandeliers, gilded plasterwork around the proscenium, the box and balcony fronts and murals on the ceiling and balcony walls.

After a string of owners during its first decade or so in operation, and many successful runs (including the first stage version of “Little Lord Fauntleroy”, in 1889, and the final stage appearance in New York of famed actor Edwin Booth in 1891), the Broadway Theatre was acquired by B.S. Moss in 1908 who began playing Keith-Albee Vaudeville. Soon movies were part of the program at the B.S. Moss' Broadway Theatre.

However, by the late-1920’s, competition from a number of newer and far larger movie houses nearby spelled the end for the B.S. Moss' Broadway Theatre, and it was closed January 2, 1929 and was demolished later that year.

This theater was a “House of Hits” for the first 20 years or so of its existence – the site of many popular musical shows. It was a leading B'way theater during that period. When it became a vaude-filmer, it did not have the same cachet, because of newer and better theatres opening to the north. An interesting point about it is that its right exterior sidewall was very very similar to the left sidewall of the Tremont/ Astor Theatre in downtown Boston, also designed by McElfatrick, which opened in 1889 and which was demolished in 1983.

The old Broadway Theatre is listed in the 1897-98 edition of Julius Cahn’s Official Theatrical Guide. The seating capacity is given as: Orchestra: 626, Balcony: 436, Gallery: 538, Total: 1,600 seats, plus boxes. The proscenium opening was 36 feet wide x 36 feet high. The stage was 48 feet deep. The theatre was on the ground floor and had both electric and gas illumination. The house orchestra had 24 members.

There’s an old picture of the Broadway here: http://www.josephhaworth.com/broadway_theatre.htm