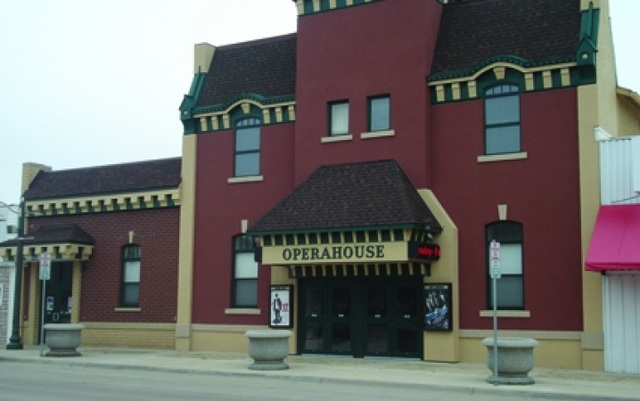 “F.W. Bailey has opened a motion picture show in the opera house at DeWitt,” said the Iowa notes section of Moving Picture World for August 14, 1915.

I found this small article on the DeWit Opera House: The DeWitt Opera House built in 1876. This large building had a sizable stage, orchestra pit, dressing rooms, a long balcony above the main floor audience and a lobby as the front entrance. This large theater is called a “stand-alone” opera house because the entire building was devoted to the theater and did not include space for another business.

For much of its history the Opera House was known as the Majestic Theatre. An article syndicated by the Associated Press ran in the January 30, 2006, issue of the Globe-Gazette and said in part:

“DEWITT — Plans have been announced for a major renovation of the Operahouse Theater in this eastern Iowa town.

“The project comes 25 years after residents of DeWitt and surrounding communities raised more than $300,000 to refurbish the former Majestic Theater for movies, live performances and meetings. The 1878 building now is in need of another revamping.”The name change might have happened as early as 1921, when the January 1 issue of Exhibitors Herald published this item:

“DeWITT, IA.— G. L. DeNune, who operated the Majestic theatre here for a number of years, has purchased the controlling interest in the DeWitt opera house, buying the stock of the Langan interests. He will remodel the house.”Grover L. DeNune’s death notice in the September 18, 1948, issue of Motion Picture Herald said that he had been an exhibitor in DeWitt for 32 years, and at the time of his death held a half interest in the Majestic. The September 11 issue of the same publication had noted his sale of a half interest in the house to Iowa United Theatres. He must have opened or taken over the original Majestic about 1916. I haven’t been able to discover if the original Majestic continued operation after DeNune took over the Opera House, or when the name was moved from the first theater to the second.