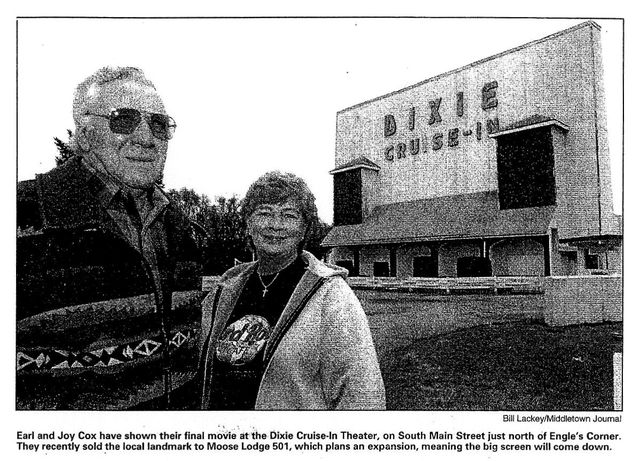 The Dixie Auto Cruise-In opened on September 10, 1947, featuring the 1946 musical “Centennial Summer” with Jeanne Crain, Cornel Wilde and Linda Darrell. The drive-in was opened by L. J. King of Dayton and Dan Spiegel of Cincinnati, Ohio, at a cost of $170,000. Eventually it was operated by Rube Shore from Cincinnati. It was constructed with a parking ramp that would park 600 cars along with individual RCA in-a-car speakers for each parking spot.

In 1963, Associated Theatres from Cleveland, Ohio, was the operator of the drive-in. It was sold to Earl Cox in 1970. Cox owned and operated the Starglow Drive-In in Middleton also. At one time Cox controlled the Colonial Theatre (aka Sorg’s Opera House), the Studio Theatre and built the Towne East Theatre in Middletown. Earl Cox had movies is his blood since he was a Marine serving in WW II in the South Pacific. Cox recalled, “After we’d taken an island the Navy would bring in their ships and they always had movies on board". He would stretch a white tarpaulin between two palm trees and use that as a makeshift movie screen. All the Marines would sit around on stumps or logs and watch the movies.