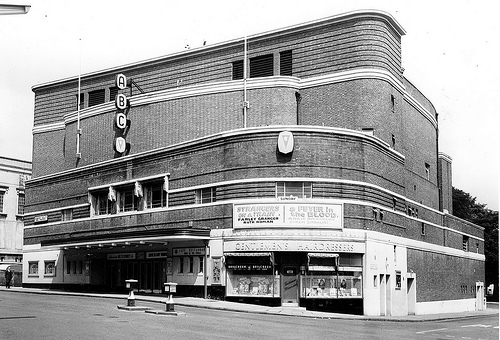 A classic Art Deco style cinema which opened as the Ritz Cinema on 13th May 1937 with Peter Lorre in “Crack Up” and Rochelle Hudson in Woman Wise". It was built by the Union Cinemas chain who were taken over by the Associated British Cinemas(ABC) chain in October 1937. It originally had a Wurlitzer 3Manual/7Ranks organ (with illuminated console and grand piano) installed, which was opened by organist Harold Ramsay.

The Ritz Theatre was built to compete with the Empire Cinema next door. Like the Empire Cinema, it staged variety shows as well as movies and in the mid-1960’s staged pop shows starring Gene Pitney, Cilla Black, and all on the same bill:Walker Brothers, Cat Steven, Jimi Hendrix & Englebert Humperdinck. In February 1961 it was re-named ABC.

It was closed on 28th May 1977 for conversion into a 3-screen cinema and a bingo club. ABC 1,2,3 opened 6th October 1977 with seating provided for 313, 187 and 150. In 1986 it was taken over by the Cannon Group and was re-named Cannon in late-1986. Taken over by Cineven it became the Odeon but was closed on 10th July 2003. The final films were “Charlie’s Angels-Full Throttle”, “Bruce Almighty” and “Fast & Furious”. This is a fine example of an Art Deco style provincial ‘super cinema’ worthy of preservation. The Gala Bingo Club became a Buzz Bingo Club in June 2018.

Further 2 photos added on the photo tab: Rare colour photos of the exterior neon display at the time of opening in May 1937

New photo added of the Ritz Wurlitzer with Richard Dimbleby at the console.

There is some good news about the art deco plaster work features of the old auditorium. Contrary to popular belief – including my own – it would appear that the original Verity & Beverley interior still survives behind the panels of the 3 screens formed in the former circle area. The conversion that occurred 40 years ago this year was really the construction of a ‘box’ structure within the space. A friend has managed to gain (lawful) access to the former cinema areas. There is a gap of about 10' between the box construction and the old auditorium. In this gap the splay wall decorative grilles survive albeit the faux balcony fronts have been removed. The original ceiling decoration is also intact in the majority. The original projection room survives intact, even the twin deck record player is still in the projection suite. The suite is quite large & the projection port holes are still in place but look into the void above the box construction of the 3 studio cinemas. The original stage & lighting switch gear is also still there too. The original balcony front was extended forward to form the largest cinema of the 3 created. This cinema uses the upper part of the original proscenium opening for the screen area. The 2 other cinemas were formed in rear circle areas , 1 either side. The new projection room was built at the back of the old circle which is below the original projection suite. The throw from the original suite was too steep to serve the new main screen. I have added photos of what remains in this void area. My friend only had his mobile phone on him so the photos are not of high quality but give detail of what is there.

New photo added showing the fan shaped outline of the auditorium. Internally, the auditorium was only slightly wider in the rear stalls compared to at the proscenium. An internal exit stairway from the circle ran down both sides of the auditorium and emerged either side of the stage out to street level. The Ritz/ABC was built on a sloping site with the stage at the lowest point so no site excavation was required to acheive a rake for the stalls. Only the organ chambers were below the front stalls level. On the rear wall of the stage was a small chamber that projected beyond the rear wall to accommodate the sound horn behind the screen. Although there is no standard fly tower, there was a grid above the stage for stage lighting battens and the house tabs could be flown upwards rather than opening to each side of the screen but this was rarely done as there was also rise & fall festoon tabs for stage presentations. On the roof near the front there are 2 white ‘cabins’ either side of the projection suite exhaust outlets – but I have no idea what they were used for!

New photo added of Cat Stevens on stage in 1967 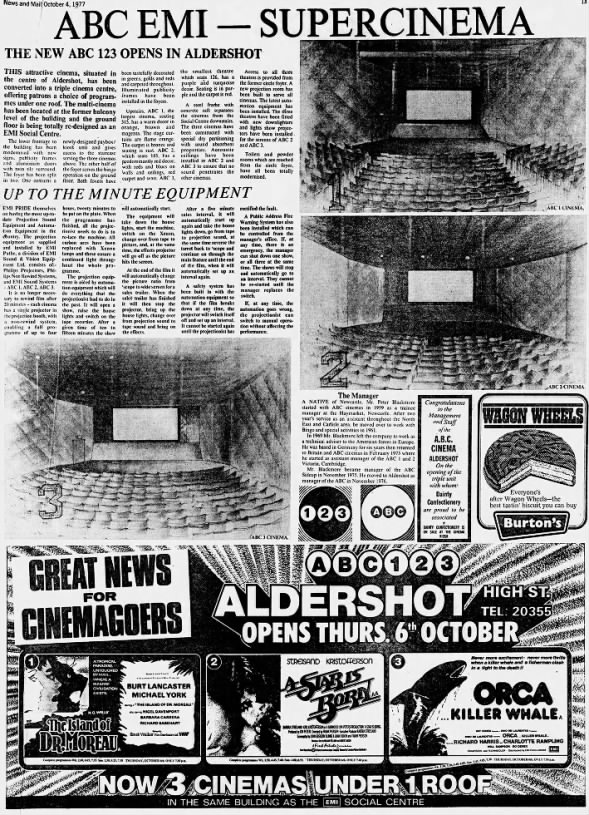