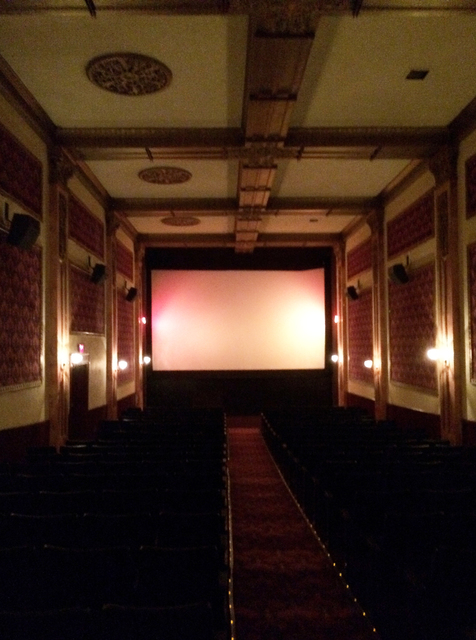 The Downer Theatre opened in 1915, and was soon recognized as one of the most modern urban movie houses of the day, and became a model for subsequent neighborhood theatres. Not only did the elegantly Classical style Downer Theatre have its own Weickhardt Pipe Organ, but its own in-house orchestra. It was remodeled in a Streamline Moderne style reopening on October 17, 1937.

Acquired in 1990 by the Landmark chain, it became a twin screen theater, but was given a badly needed renovation that was respectful of its history. Gold leaf was reapplied, the auditorium was repainted, and carpeting that duplicated the orginal 1915 carpeting was laid in the lobby and auditorium floors.

The Downer Theatre is the oldest operating cinema in the city of Milwaukee and specializes in art and foreign films.

The Downer’s past is very interesting. It was one of the few movie houses in Milwaukee not on a streetcar/bus tansfer corner. For years the Downer did poor business. Even in the war years of the 40s when all theaters did well, the Downer struggled. In the late 40s when it was operated by Fox Wisconsin the Downer became an art theater. For years it was the only art theater in the area. It had many long runs. Bitter Rice, Diabolique, and Carry On Nurse played for several weeks. Tales of Hoffmann had a roadshow engagement.
Following the Downer’s success as an art house, other Milwaukee theaters adopted an art theater policy. The Parkway (35th and Lisbon)for a short time showed art picture, the Hollywood (Green Bay Avenue)changed its name to the Coronet and for a few years showed art pictures. The Times (60th and Vliet) became the Times Fine Art and for many years had art films. The Times is still going.

When I worked here as a projectionist, it was still a single screen, had OLD Super Simplex projectors I believe (maybe E-7’s, it’s been a long time!). I always got a kick out of telling people I worked at the Downer Theatre, it always got a chuckle out of them! Got alot of lame comments like, gee, it must be a real depressing place to work, and on and on. There really wasn’t anything earth shattering about this place, kind of a nice art house in a trendy neighborhood, got on the arthouse format long before the larger Oriental did, now both are run by the same company, Landmark Theatres. I only ran 2 films here, Annie Hall (which seemed to run forever) and Altman’s
3 Women. It was a fun place to work, great neighborhood, and still is.

It was unofficially announced today that Warner Bros, one of the leading film companies in the United States, has taken over the Wisconsin branch of the Universal Theatrical Enterprises chain of theatres, and that the concern will assume ownership at 12 o'clock midnight tonight and will start operating these theatres Sunday.
Theatres included are the Sheboygan theatre, which was erected at a cost of $600,000 and which was opened to the public in 1928; Venetian theatre at Racine, Kenosha theatre at Kenosha, and all the Universal theatres in Milwaukee except the Alhambra. Among the Milwaukee theatres are the Lake, State, Downer, Juneau, Nation and Kosciuszko.
The deal, which has been in the course of consummation during the past week, involves millions of dollars in theatre values.
Manager K. G. Wood of the Sheboygan theatre today would not make official comment as to the completion of negotiations, but admitted that he was notified late Friday to take a complete inventory of his theatre, and to check meters at the close of business tonight.
The Sheboygan theatre is one of the most up to date in the state chain. It is equipped with the latest Western electric sound equipment, with new changes and installations made from time to time as improvements are made in the sound facilities. The theatre in Spanish atmospheric design has a seating capacity of 1,600.

What a great Name for a theatre.

That Weickhardt Pipe Organ that was in the theatre when it was first open was made by the Wangerin-Weickhardt Organ Company, 112-124 South Burrell Street, Milwaukee, just 8 miles South from the theatre. They had another factory Southeast around the corner .2 miles, at 117-121 South Austin Street and by World War II had a factory less than 2 miles North at 2330 South Burrell Street. Founded in 1895, they made over 1,000 mostly church organs. During the theater organ boom in the 1920’s the Barton Organ Company of Oshkosh, Wisconsin could not keep up with production demand. This factory stepped in to assist Barton and provided space as a second manufacturing facility during the years. They made wood parts for aeroplanes during World War I and in World War II made things of wood that had been made of metal so metal could be used for defense. Does anyone know what happened to the Weickhardt organ?

It was later sold and shipped 307 miles to a Lutheran church in Iona, Michigan.

In June, 1972 it was sold and shipped 242 miles to the Windsor Theater Organ Club in Niagara Falls, Ontario, Canada.

This last location is 14 miles from North Tonawanda, New York, the location where the WurliTizer was born!

Anyone know what’s happened to the organ in the last 41 years since June of 1972?

October 17, 1937 re-launch as a streamlined deco house in photos.

Now the WurliTzer organ (style E opus 1630) is the first and only theatre organ ever sent to Italy. It is in an organ builder’s office in Modena and is in perfect conditions. I’ve played it at the end of August this year and is in great shape. it uses the original motor and blower. The console pneupatics are still the originals and there are the original relays that are not connected yet. It uses an optical fiber system built in the 90s just for it that can play, record and store combinations and pieces. On youtube, searching wurlitzer opus 1630, there is a video of it.

Update on the WurliTzer: now it’s installed in a private home in northern Italy and it still is the only theatre organ in all of Italy.

I think these eagle corbels are originally from this theatre.