Reopened as Southside Drive-In on June 16th, 1978, by GTC. The address given in the ad was 5300 Hawkinsville Road. It was Macon’s last drive-in theatre. 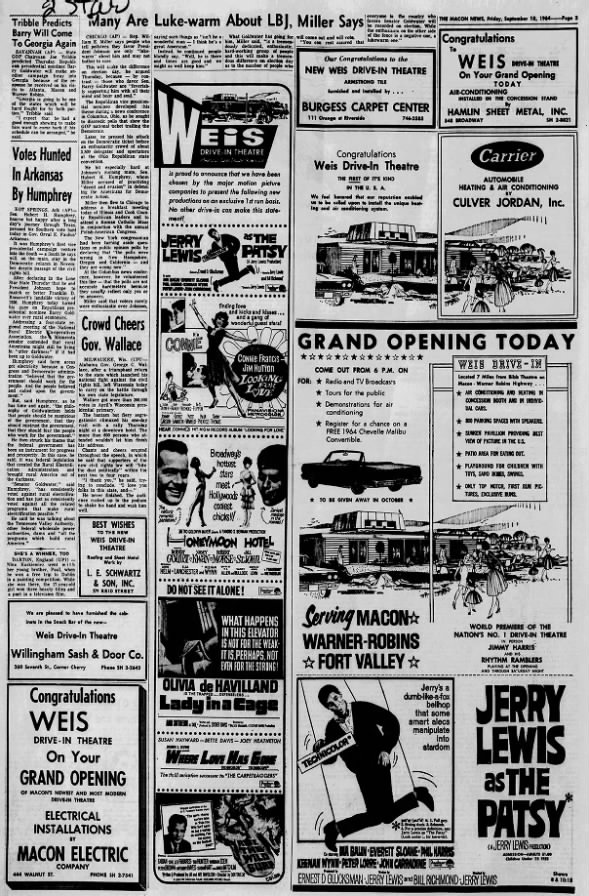 The entrance to the old drive in is now Cargill Road Con. I could not get an exact address, but the Macon Storage Center sits right alongside the old entrance road so I used that as a reference.

Today, the Macon Plant occupies the property with no trace of the drive in remaining.

In June of 1972, I was attending college in Milledgeville and made the drive to Macon because I wanted to see just what an air conditioned drive in was. The field had several large air conditioning units per row, each with about 8 grill capped hoses attached. This allowed the cars parked next to the unit and the ones parked next to them to hook the grill to their windows and enjoy a/c in the summer and heat in the winter.

This was not a very successful set up even in those pre energy crunch days. There were only enough units to serve about a third of the lot, and they made so much noise that it distracted from the movie. I was working for Georgia Theatre Company in the late 70’s when they bought out the Weis operations in Macon, and the first thing they did was remove these units.

As for my visit, I enjoyed the show. It was first run Play It Again Sam, doubled with Odd couple. The theatre itself was nice and well kept up. I believe that there was an identical theatre to this one built by Weis in Augusta. There was also a weis Drive In in their hometown of Savannah.

This was cutting edge in the 60’s, a drive-in with air condition in the summer and heaters for the winter. A concession stand that was sunken, you could see over it if you parked behind it. Enjoyed many movies at the Weis!