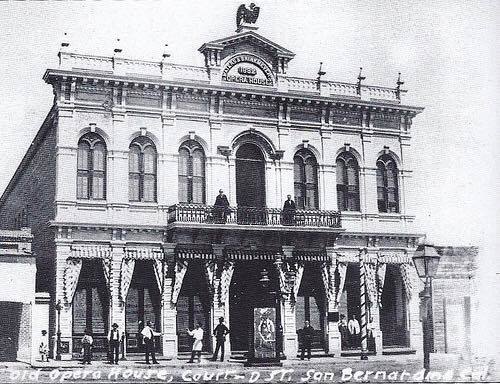 According to the city of San Bernardino, the Opera House was built in 1882 and demolished in 1927. Although historically it is referred to as the San Bernardino Opera House, newspapers advertisements during its years listed it as “Opera House.” In fact an old photograph shows “Waters & Brinkmeyer’s Opera House” carved in stone at the top of the building.

Fred Holladay, writing in the San Bernardino Sun in 1986 noted that a former mountain man, James Waters, was a partner in the Opera House. Waters, born in New York in 1813, led a colorful life as a trader in the West before finally ending up in San Bernardino and becoming a wealthy property owner. He served as county supervisor from 1865 to 1881. Despite his cattle ranches and large buildings in San Bernardino, his pride and joy was the Opera House, which he erected with Herman Brinkmeyer. For those interested, the city of San Bernardino has a more detailed history of Waters life, which was written by Arthur Woodward in 1955.

When it closed, the San Bernardino Sun published a list of over 100 well-known actors who appeared at the theater. Included were such performers as Maude Adams, Sarah Bernhardt, George M. Cohan, Lillian Russell, Al Jolson, and Lili Langtry. From Broadway came Will Rogers, Sir Harry Lauder, Mae West, three Barrymores, and magician Harry Houdini. In addition to lecturers and speakers, in April Of 1912 there was President Howard Taft and future President Woodrow Wilson, on different nights.

After Waters death in 1889, his daughter, Martha L. Kiplinger, continued on as the manager until 1927. The opera house was remodeled extensively in 1912 by architect Walter J. Saunders and within a year began showing movies along with vaudeville. For 15 years it was the exclusive showplace for Paramount Pictures in San Bernardino. Martha also became a legend in San Bernardino and staged, along with Los Angeles and San Francisco, all of the New York productions. According to the Sun, she was personally acquainted with all of the prominent stage producers and luminaries of the time.

Chuck Palmer, writing in the Sun in 1983, quoted a former employee as saying that Mrs. Kiplinger patrolled the aisles during the show and that “No necking around was allowed.” If a fellow put his arm around the girl next to him, he was quickly made to put it down. Another employee said that she inspected each ushers before a show and then at the end came by and personally gave everyone a silver dollar. Martha Kiplinger’s obituary on August 18, 1942 praised her as “the nation’s most distinguished woman theater manager.”

The Film Daily Yearbook of 1922-23 listed the Opera House among its “Important First Run Houses,” and the 1927 edition lists it with 910 seats. The Los Angeles Times noted in 1882 that it was to be built with 900 seats but according to a former employee, it could hold up to 1,400.

Earl E. Buie, writing in the Sun in 1970, told of an early high-tech feature installed before 1920 and phased out with the advent of radio. It was a 20-foot electrical board with lights, simulating a baseball field and diamond, which was set on the stage. Crowds of up to 2,000 showed up for the World Series games. It was operated from back stage where a telegraph operator would get the play-by-play description. Earl was among the others who operated the board. The board showed the pitches, balls, strikes, fouls, hits, errors, base runners, and more. It kept the fans as excited as if they were at the baseball park.

While sorting through the numerous stories in the San Bernardino Sun, one can finally come to the conclusion that it was ultimately a story about people, not just a building. Over 45 years, in addition to the thousands of actors and famous people who passed through San Bernardino, there were the Opera House employees: The stagehands, lighting men, operators, musicians, cashiers, doormen, and ushers. Some made it a family tradition: James D. Faris was a stage carpenter who brought his son, James E., at the age of 10, on as an apprentice giving them a combined 45 years of service. There was Charles Herkelrath who was electrician for 35 years. There was Henry D. Ingraham who was a janitor for 33 years. There was John Andreason Jr. who was treasurer of the road shows for 30 years. The Sun noted many others with at least 15 years of service and those who went on to more prominent positions in San Bernardino.

The Arda Haenszel California Room at the San Bernardino Public Library says that the last day of operation was on May 15, 1927 and it was torn down that year to extend Court Street from D Street to Arrowhead Avenue.

The 1912 remodeling project designed by architect Walter J. Saunders is mentioned in several issues of Southwest Contractor and Manufacturer. An entirely new stage house, measuring 43 x 74 feet, was built. Early reports mention the stage house and the rebuilding of the balcony in reinforced concrete, at an estimated total cost of $30,000, but the announcement of the letting of the contract, in the issue of July 13, 1912, mentions only the stage house and gives the cost as $16,800. It’s possible the balcony rebuilding was abandoned, but the seating capacity would still have increased when the original stage space was incorporated into the auditorium.