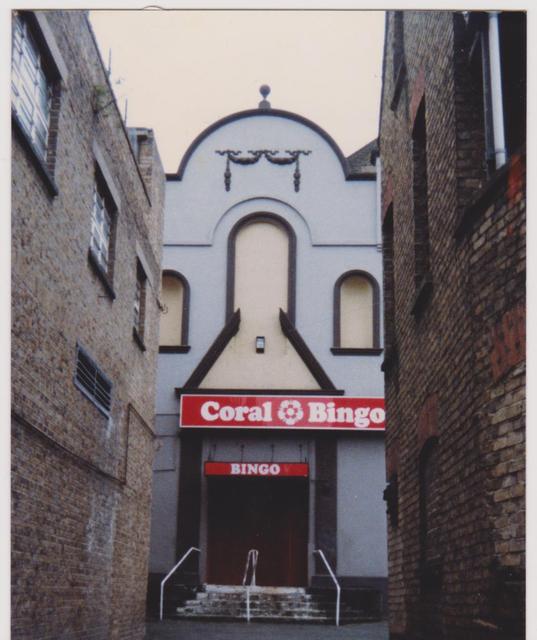 Located in Chatham, Kent. Built up Fullaghars Yard off the High Street for the Croneen family, it was one of three Invictas Cinema’s they operated in the Medway towns. Opened on 7th February 1916 and had a 30 feet wide proscenium. It was soon to have a Woolworths store on its immediate left. H and W.G. Croneen sold this Invicta Cinema to J.H. Canvin in April, 1929. Films lasted until 1939 from when the Church Army used the cinema, but after the war it became a warehouse then an indoor market.

In 1962 Gerry Cameron spent £20,000 fitting out the Invicta Cinema for entertainment again, but wrestling, ballroom dancing and bingo, not films. The Rolling Stones were booked in March 1964. However bingo was most viable and Mrs Cameron sold the cinema to Coral. They persevered until March 1985. Bingo in the Ritz Cinema was more lucrative for Coral, so the Invicta Cinema was demolished in 1987.

Hello, I am Gerry and Pauline Cameron’s Grandson. Gerry past away before I was born. I’m interested in how you found out this information about this old venue’s past ownership? I would be interested to find out more as I’m trying to discover more about my family tree. Thank you.

I remember this as The Invicta Ballroom not that it was particularly ballroomish. There was a flat balcolny with a decorative wrought iron rail at the front, flat main floor with small stage at the back. The programme at the time, 1962, was pop bands and music acts of the day. Those I saw and remember were Screaming Lord Sutch and The Savages, many who gained world fame in their own right later were members of The Savages including Ritchie Blackmore,Jimmy Page, John Bonham, Jeff Beck. Lord Sutch moved to politics in 63 starting the Monster Raving Loony Party becoming a regular at main elections and by elections for many years. BUT……. The major claim to fame for the Invicta was that The Beatles appeared there in February 1963, dressed as had been their practice in back leather. Their 1st Parlaphone record Love Me Do had been a minor hit following release in Oct 62 so they were filling time playing dance hall dates up and down the UK before the release of their next Record Please Please Me in March which of course was the beginining of their world wide fame.