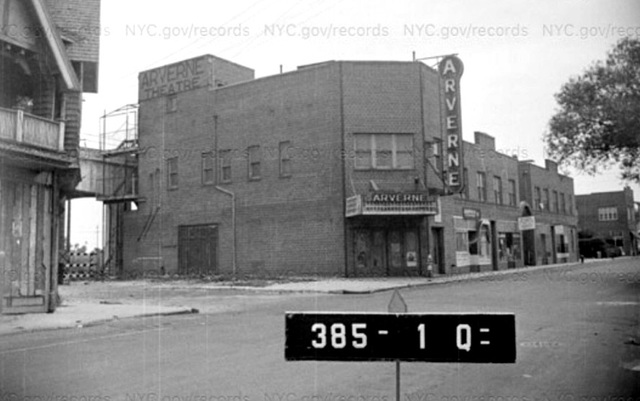 The theatre dates back to at least 1914 when a screening of “Birth of a Nation” was reported. The Arverne Theatre was seasonal and featured sound as of 1930 as well as live performances of Yiddish theatre. By 1938 it was operated by Kenroe Theaters Inc. By 1941 it was operated by the Sea Shore Amusement Corp. out of Rockaway Beach. It was still open in 1951, but had closed by 1952.

I suspect that a careless typesetter added either an extra 2 at the beginning or 0 at the end of the figure for the cost of the Arvern’s sound system.

In 1927, according to a footnote in Kyle Dawson Edwards' Corporate Fictions: Film Adaptation and Authorship in the Classical Hollywood Era, it could cost as much as $25,000 to install a Western Electric sound system in a big theater. However, the price declined rapidly, and by 1929, as noted in Aubrey Solomon’s The Fox Film Corporation, 1915-1935, Western Electric had developed a less expensive system for smaller theaters, priced from $5,500 to $7,000.

In 1930, with the economy in steep decline, it was probably possible for the operator of the Arverne to have one of those systems installed for a fraction of that price. Prices would have declined even without the depression, and with Western Electric eager to keep skilled staff employed while the company weathered what they still expected to be a brief economic storm, they were probably willing to do some pretty deep discounting.

According to an item in The Film Daily of May 13, 1936, the Arverne Theatre then had considerably more than 300 seats:

Roof gardens were quite popular. The Park, down the road, which became the Belle Terre also had one.

As far as seating capacities I’m amazed that they would be so large. There were probably more than a dozen theaters on the Rockaway Peninsula at that time when, for many, their operation was seasonal, as was the Arverne.

Longtime Rockaway historian, Emil Lucev, happened to contact the Rockaway Park Wave and spoke to my contact. Apparently there was a prior Arverne Theatre which burnt down in the Great Arverne Fire of 1922. Have to do some research to determine if the new was built on the same site as the old but now have some new resources to check.

I love that the 1926 ad for “Birth Of A Nation,” posted by Lost Memory, shows a supporting presentation of Kosher Kitty Kelly. KKK? Irony?

The lack of quotations around the title in the ad, suggest this was a live production. KKK was originally a stage musical, although it should be noted that it also had silent film version, (according to Wikipedia) that was produced in 1926, by none other than Joseph P. Kennedy, Sr. Unless there is other evidence to support facility at this theatre for live productions, I would assume it was the film that was screened during this engagement.

I have seen ads for the theatre for just Yiddish productions during the course of a week. So it’s possible that this was a combo situation. Is KKK the precursor to or a rip off Abie’s Irish Rose?

Abie’s Irish Rose had its Broadway debut on May 23, 1922, at the late Fulton Theatre, according to IBDB.com. Kosher Kitty Kelly followed a few years later, opening June 15, 1925, at the Times Square Theatre, still standing, and in the midst of restoration/re-use, on 42nd Street.

Been waiting forever for the Time Square unveiling.

The correct theater address was 61-14 Rockaway Beach Boulevard, Arverne, NY 11692. There is no Rockaway Park Blvd. Although I don’t have a vivid memory of the theater, I lived in the Rockaways since the 1950’s. We’d visit friends up the block on B.61 street, just feet away from the theater. If you look behind the theater building, one can see the elevated Long Island Rail Road tracks which went through the Rockaways. In 1956, the line was purchased by the City of New York.