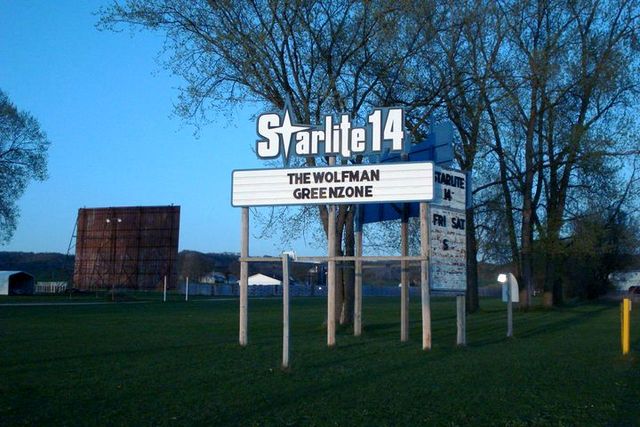 The Highway 14 Drive-In was opened May 16, 1952 in the Muscoda section of Richland Center. It was operated by the estate of Sarah Eskin, who had also operated the Eskin Theatre (today the Center Cinema Twins) in the town center.

Later renamed Starlite 14 Drive-In, and the Center Cinema Twins were both taken over by Bill & Lisa Muth in 1988. In early-2014, both theatres were being equipped with digital projection equipment. It was closed in September 2019 at the end of the season. It was reopened under new owners in July 2020.

If the drive-in was sold in 1988, its renaming came before that. The 1984 IMPA still listed the Highway 14 Outdoor, but the 1986 IMPA had changed it to Starlight (sic) Outdoor.

From the Starlite 14’s history page:

On September 24, 1951, Sarah Eskin acquired land east of Richland Center to be used as a drive-in theater. She was not able to purchase the land outright, but was granted a lifetime lease of 20 acres. The deed states the premises to be used for a drive-in theater, provided that when such premises cease to be used for such purposes title thereto shall revert to the grantor, his heirs, or assigns. The grantee can pass the business on to her heirs or assigns. The Hi-way 14 Outdoor Theater opened its gates on May 16, 1952. It is now known as Starlite 14. The Starlite 14 has upgraded, using FM radio for sound for many years. Speaker posts are still there to help cars park in the appropriate spot. The Starlite 14 is a county treasure; one of 11 in the state of Wisconsin. It is the last one in Southwest Wisconsin and has withstood the test of time. At one time in the late 1950’s there were 79 drive-in theaters in Wisconsin.

On the Starlite 14’s Facebook page, Bill & Lisa Muth wrote that they are retiring and will soon put the Starlite 14 up for sale. If no one buys it, the drive-in won’t reopen in 2020. WMTV ran a short video clip about the possible closing last night.

And by the way, it’s called the Starlite 14 because it’s adjacent to US Highway 14.

Both theatres are now closed and for sale. See website for real estate office link.

I think this is the most significant quote from the article: “The land for the Starlite is owned by a local farmer and the Muths pay the property taxes on 20 acres of land as rent. If the Starlite closes for a year, the contract states that the deal, which has been in effect since 1953, would be void and the land used for other purposes.” First, the Starlite’s history page (quoted in a comment above) says the lease began in 1951. Second, this gives the drive-in a deadline. If only I had a spare $200k or so. :)

Status should be changed to open. The theatre has been sold along with the Center Cinema Twins in downtown Richland Center. The drive-in is now showing older films and providing social distancing. Here’s a story about it: https://madison.com/wsj/business/starlite-14-resurrected-in-richland-center-amid-covid-19-pandemic-but-older-movies-offer-challenge/article_fa45f095-96ac-54b0-862a-d0f3b32170b1.html

Plus the address is off also. US Highway 14 and Rd Oo Richland Center, WI, United States