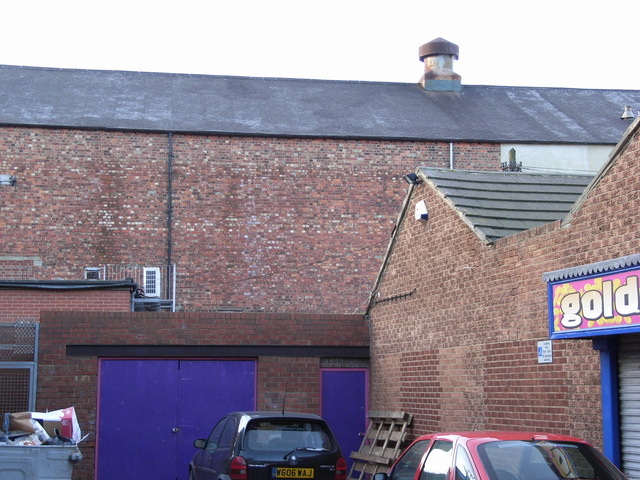 Located in the seaside town of Redcar, Cleveland. The Palace of Varieties was opened around 1912. It had a 20 feet wide proscenium, six dressing rooms and a decent size stage. There was also a café for the convenience of its patrons. By the end of 1913 it was presenting films as part of the variety programme.

In 1921 it was taken over by Messrs. Lumley & Bennett. By 1926 it was mainly used as a cinema and was operated by Arthur R. Bennett. In 1929 a British Thomson Houston(BTH) sound system was installed, one of the first in the north-east of England, and under new owners C.E. & R.B. Goldsborough it was re-named Palace Theatre.

The Palace Theatre was equipped to show CinemaScope films in 1955. The Palace Theatre closed as a cinema in 1962 with John Wayne in “The Searchers”. It was converted into a bingo club, and in 1977 a new entrance frontage was added (the top gable of the original façade could still be seen if you stood away from the building). The Palace Bingo Club closed in 1979. In 1982 it was purchased by Nobles Amusements and converted into an amusement arcade, but this had closed by 2007, and the building was demolished in 2012.

C.E Goldsborough was also known as Constence Emma Goldsborough she owned the palace in the early days with her husband. She had a sister called Kate maude she married a man called frank b etherington. They whent on to have a baby boy who was born in the palace in 1916 by the name of Frank w Etherington.Frank w whent on to own the palace in 1937 at the age of 21 Constance was Frank w auntie….Frank w whent on to run the palace as a cinema showing all the great movies of the time but in 1962 and because of other cinemas in the town it closed. In september that year it became a cash bingo hall Frank w was still the owner…. In 1977 the palace underwent a £80,000 facelift making the palace look more modern from the outsise it had the entrance moved to the right hand side, it had two bars, eating palces, and all the mod cons a bingo hall would have today…But in october 1979 the palace closed quite sudden due to another bingo hall that came to redcar it was owned by nobles arcades…In 1982 nobles bought the palace was bought by nobles who then ran it as a amusement arcade but it didnt last long….The palace was left standing empty for years even though people tried to open it into other venue’s.In 2012 it was demolished due to it having problem’s with its under surface… The Knew palace hub in the town now stands on it’s site.

“ I first met Frank when I turned up at the Palace cinema Redcar for an interview for a relief projectionist’s job in the early 60’s. My pal who held the job at that time was leaving and had put my name forward to Frank as a suitable replacement.

Having been ushered into the managers office which was at the stage end of the building and entailed walking through the cinema which was screening an afternoon show at the time I was introduced to this rather imposing but friendly man who was the director of the cinema Frank Etherington After asking the usual questions asked at interviews he put me at ease by cracking a joke about my last place of employment which had recently closed and was the Marlborough cinema in Middlesbrough. Sitting back in his chair Frank said with a broad grin “you will be all right here lad you wont have to play the piano we show talkies at the Palace” and with that he shook my hand and told me I had got the job. He then took me up to the projection room to show me the equipment and introduce me to the chief projectionist a Mr Alf Hunt whose duties I would be would be taking over two days a week on his days off. On entering the projection room I was amazed to see two huge projectors which I had never worked on before and were considered at that time to be the Rolls Royce of cinema equipment. Manufactured by the British Thomson Houston electrical company these types of projectors were installed in the prestigious Odeon Leicester Square, London. They were also in most of the top Odeon cinemas. The only other cinema in this area apart from the Palace to have this type of equipment was the Odeon Scarborough.

Having got over the shock of seeing this wonderful equipment in the Palace at Redcar I could appreciate Franks joke about my last cinema whose equipment I am sure kept the animals amused on Noah’s ark!

Having started work at the Palace I soon got used to the S.U.P.A.S as they were known. S.U.P.A standing for “single unit projection assembly” and in all my years working in the cinema industry on all manner of equipment American, British and continental I have never come across a finer cinema projector than the BTH SUPA.

I stayed at the Palace until its closure in 1962 and during this period, Frank, who liked to keep right up with cinema technology had heard that the BTH Company, the manufactures of our equipment had just developed a new XENON discharge lamp which they hoped would revolutionise cinema projection. BTH were looking for cinema owners who would volunteer to allow the company to install at no charge their new XENON lamp.

I should point out that up to this point in time the only practical illuminant powerful enough for use in commercial cinema projectors was the carbon arc which basically was two carbon rods which when touched together and then drawn slightly apart produced an intense electric arc similar to electric welding. The benefits of this new XENON discharge lamp as explained to Frank by the BTH company were: great savings on the cost of carbons, saving on electricity consumption and a much steadier light on the screen. After talking at length to the company and asking our opinion Frank decided to give it a go and the engineers arrived the following week to convert one projector to the new light source.

We ran for about two months with one projector using the new type lamp and the other using the conventional carbon arc and apart from one quite disturbing incident when the new lamp exploded the trial went very well. Ref to the explosion I was not on duty that particular night but was told about it by a rather shocked junior. We were warned by the engineers that there was a slight chance of this occurring as the new lamps when operating worked at an extremely high internal pressure. However no one was hurt as the lamp was contained within a sturdy lamp house which prevented any damage to anything outside. So apart from a very loud bang no one was any the worse! After the trial period had passed Frank decided to have the remaining projector fitted with the new lamp and we ran without further trouble until the cinema closed. “Frank got a considerable deal for agreeing to take part in the BTH trial and the only other cinema in the area to agree to the trials was the Odeon Scarborough. Both Frank and we in the projection room were very proud to be associated with these trials as today practically every cinema whether it was single screen or multiplex is equipped with XENON LAMPS.

Later that year came the bad news, Frank arrived in the projection room one day and told us the news that we had all been dreading that the cinema would close in a months time as he had decided to change to bingo. We realized business had been bad lately and we were competing with the Central and the Regent both owned by Thompson Enterprises a large company that had cinemas all over the north east. We carried on however but one by one the staff were leaving having found other jobs until the final week arrived and I was the only projectionist left. I remember the final night the film was ‘The Searchers’ starring John Wayne and one of my pals came up to see me. He had got the night off from the Central Cinema and together we ran the final show. Trevor Hodgson was his name and he used to tell all his pals how Ken let him have a go on the SUPAS on the last night of the Palace. Shortly after the Palace closed Trevor moved to London where he got a very good job in one of the film studios. Sadly Trevor died a few years ago.

Frank Etherington and I remained friends for a long time after the cinema closed. I used to pop in and see him before the bingo and Frank would say would you like to up go upstairs and give the projectors a run. There was one morning when Malcolm from the Regent Cinema brought a reel of film along and we decided to give it a run through one of the projectors. Unknown to us, Franks mother was in the auditorium and when she saw the light of the projected film coming from the projection box window she fainted thinking there was a ghost up there!

I continued to maintain the projectors right up till Frank sold out to the Noble organisation.

One day with sadness I watched workmen for the Nobles actually destroy the SUPAS projectors and load them on the back of a scrap wagon.

When Frank died it was a sad passing not only of a friend but of a great showman and a real gent.