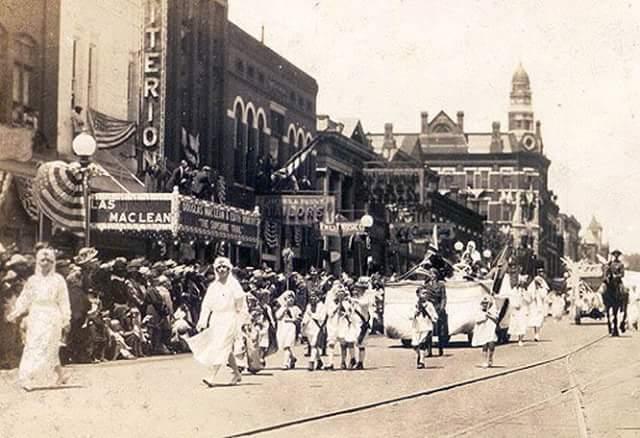 The Criterion Theatre was opened on August 22, 1921 with Pola Negri in “Passion”. Still open as a silent movie theatre in 1931, it was listed as (Closed) in 1932, having never been equipped with sound.

acdecoster: This is a bit of a puzzle. A vintage postcard reveals that the building with the corner tower seen in our old photo was at the corner of 3rd and Cherry, so the Criterion was in the 400 block of Cherry Street. My best guess is that the Criterion was at 424 Cherry, as the building adjacent to the right of it in our photo appears to be the building that now houses the Hummingbird Stage and Taproom (430 Cherry.) Almost every other building on the block is either gone or remodeled beyond recognition.

It’s possible, and even likely, that the entire interior structure was demolished and what amounted to an entirely new, lower building was built within the old walls. In fact it’s most likely that the walls are all that remains of the Criterion.