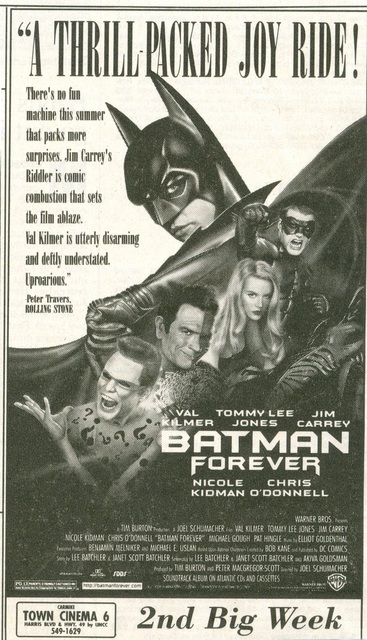 Town Cinema 6 was originally a Stewart & Everett Theatre. S&E built several theaters based on its design: (Carmike)Cinema 4 in Aberdeen, Havelock Cinema 4/6 (Carmike Cinema 6) in Havelock, Cinema 6 in Wilmington and Cinema 6 in Jacksonville, and possibly others. Only the Havelock Cinema remains in operation; Carmike abandoned Aberdeen (and Charlotte!) and replaced the Wilmington and Jacksonville Cinemas 6 with megaplexes.

Town Cinema 6 was originally a Stewart and Everett Theatre that opened on May 24,1985 as Charlotte’s newest deluxe state-of-the-art theatre complex. S&E built several theatres based on its design on the same architectural structure: Cinema 4 in Aberdeen,the Havelock Cinema 4/6 in Havelock, Cinema 6 in Wilmington and Cinema 6 in Jacksonville not to mention Cinema 4/8 in Lexington and others within the region that were former S&E Theatres.

When Carmike Cinemas took over the operations of the Town Cinema 6 and others after Carmike’s acquisition of all S&E Theatres in 1986,it abandoned Aberdeen,Charlotte,and Lexington and replaced the Wilmington and Jacksonville Cinemas 6 with megaplexes. In Charlotte,Carmike closed the Capri and Village Theatres by the late-1980’s and the Town Cinema 6 went from showing first-run movies to becoming a second run dollar house under Carmike Cinemas. Only the Havelock Cinema remains in operation as it expanded from four to six screens and most recently expanded from six to eight screens in order to keep up with the competition.

Open on May 24,1985 under Stewart and Everett Theatres The Town Cinema 6 was Charlotte’s state of the art deluxe cinema complex.

THE OPENING ATTRACTIONS FROM THE TOWN CINEMA 6:

And Coming Soon To The Town Cinema 6:

Opened on May 24,1985 under Charlotte based Stewart and Everett Theatres. Closed on June 16,1997 by Carmike Cinemas.

I have the original ads from its May 24,1985 opening of the Town Cinema 6. If you need to see them please contact me at and I would be glad to send you the newspaper scans.

I had the pleasure of seeing Rambo First Blood Part II the opening week of Town Cinema 6 in 1985. I started working there in 1987 (my first job), shortly after Carmike took it over. The pay was horrible – since I was in high school, I was paid a “student” wage, which was below minimum (it was somewhere around $2.50 to $2.75 an hour). I loved it anyway. Free movies, popcorn, and drinks somehow make up for low wages, at least when you’re 16. I see in the other comments how Amadeus showed there in 70mm; projector #6, which was for one of the two big auditoriums, had the 70mm fittings, but I doubt they were ever used again. I know they weren’t used between 1987 and 1990, plus other theaters that came along were more advanced for special engagements like that.

The lifespan of a film was interesting to watch – we had some films that were pulled within a week because no one was coming to see them (Evil Dead 2 was one of them). And although not a grindhouse, there were so many obscure, grindhouse-style or 80s horror that passed through there: anthology films like The Offspring with Vincent Price, Creepshow 2, and forgotten oddities like Nightmare at Shadow Woods, or The Outing.

But the summer of 87 was amazing. In just a couple of short months, we had The Untouchables, Predator, Robocop, The Lost Boys, The Living Daylights, Innerspace, Jaws the Revenge… okay scratch that last one. It was a very busy, very fun summer.

Despite becoming my second home, the theater itself was nothing special. Dull green curtains throughout the auditoriums, green carpets and accents on gray walls in the lobby (I wish I had pictures). Three auditoriums on each side of the building – 2 big and 4 small. In the back of the middle auditoriums on each side were small rooms. The small room on the left was where the drink syrup and CO2 tanks were setup and stored; if you were watching a film in this auditorium, you probably heard the release valves of the CO2 tanks with short bursts of hissing sounds. On the right, the small room had the time clock and early on had a rack with the vests we wore.

That only left the candy/popcorn storage – last door on the left side before the exit. For a long time the door to that room didn’t even have a doorknob on it. All it took was one theft to get one installed.

The projector booth was H shaped. Despite inadequate air conditioning, I spent many hours up there either building/breaking down films, threading/running projectors, or just sitting by the windows watching the movies themselves. Plus I’ve fixed my share of brain-wraps (if you’ve ever worked in a theater with a platter system, you know what I’m talking about). A wicked wrap left a nasty scratch down the print of Beetlejuice for a good reel or so (we got that movie months after it had been released, so it didn’t really upset any crowds). Sometimes we would find some gems up there, like old prints of Music Video ZAP, which were just music videos like Rick Springfield’s Bop til You Drop and Sade’s Smooth Operator. These videos were advertised in the paper along with the movies back when the place opened.

And I’ve seen it mentioned on other theater sites, yes, the marquis was above a slanted, slippery metal roof that you had to shimmy up to from the top of a rickety step ladder. I have changed it in the rain, snow, and ice. But even on a clear day, it was no treat. Minor sour grapes there.

It was sad to hear about the theater’s decline and that it was leveled, but I was glad to be there during the heyday. Thanks to facebook, I’ve reconnected with several former co-workers from 30 years ago. We all look back at it fondly (we were so young). It was a huge part of my youth, so it will always maintain a special place in my heart. 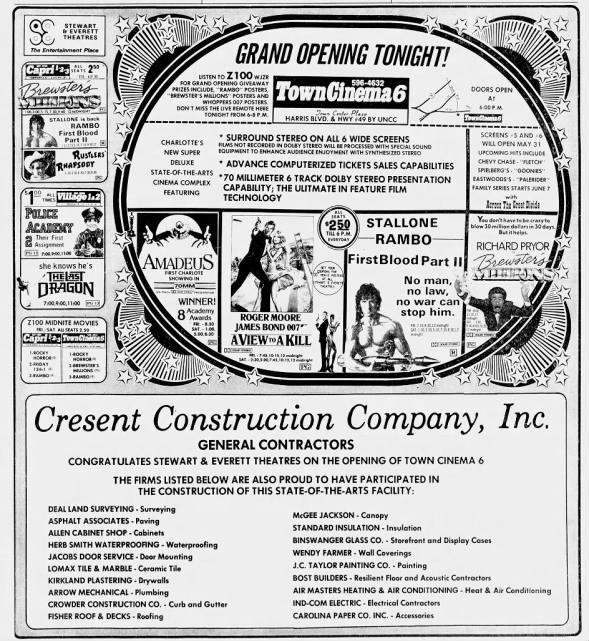 The final day of performances: August 23rd, 2000. It marks the end of Carmike Cinemas in Charlotte.