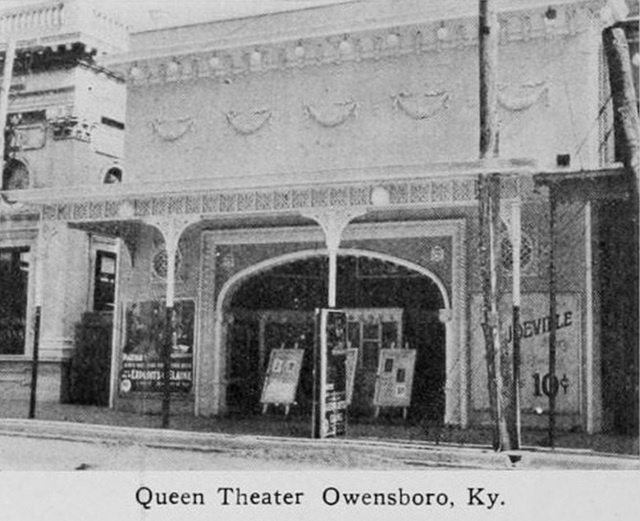 The People’s Theatre opened in December of 1909. The theatre was remodeled in 1915 and the name was changed to the Queen Theatre. It was closed in January 1918.

“The Old People’s, Owensboro, Ky., has been leased by George Bleich, who will renovate the house and open at an early date with vaudeville and pictures. The house will be renamed.”

The January 5, 1918, issue of The Moving Picture World had a brief item saying that “[t]he Queen theatre, Owensboro, Ky., has gone out of business as a result of the war tax.”

This reopened as Queen on May 27th, 1915. Grand opening ad in the photo section.

There is no street called Main Street in Owensboro, but I believe I have found the location of the Queen Theatre, as the front portion of the ornate building seen next door to it in the vintage photo uploaded by Granola is still standing in the 100 block of W. Third Street.

The site of the Queen is now occupied by part of a glassy, modern bank building to which the remaining portion of the old bank building serves as an entrance. The bank uses the address 100 w. Third, but a Verizon office directly across the street from what was the theater’s lot is at 115 W. Third. I would expect the theater most likely used the address 114 W. Third Street.