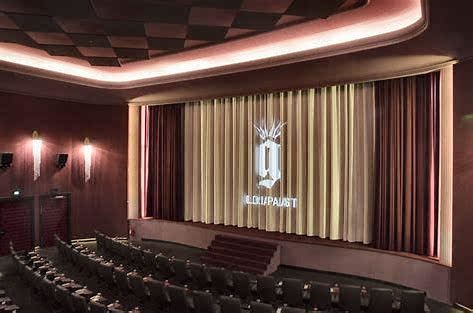 Located in the Altstadt-Lehel district in the centre of the city. The Gloria-Palast am Stachus was opened on 28th August 1956 with a capacity of 800-seats in orchestra and balcony levels. It was operated by Ilse Kubaschweski. She was born on 18th August 1907 in Berlin and died on 30th October 2001 in Munich In 1945 she took over the Kurfilmtheater Oberstdorf with Luggi Waldeitner (it has its own page on Cinema Treasures). Later Ilse Kubaschweski & Luggi Waldleitner operated the Divina Film GmbH & Co (from 1949-1974) and founded and operated the Gloria Film GmbH & Co and Gloria Filmverleih KG distribution. She produced movies like “08/15” starring Joachim Fuchsberger & Matio Adorf, “Faust” starring Gustaf Grundgens, “Alle lieben Pater” starring Peter Kraus, Jannelore Schroth and “Boy Gobert”, “Grun ist die Heide”, “Schwarzwaldmadel”, “Der Traum von Lieschen Muller” or “Ave Maria”. Her most successful picture was “The Trapp Family” and “The Trapp Family in America” after a true story. It was directed by Wolfgang Liebeneiner starring Ruth Leuweik & Josef Meinrad. A 1965 remake was produced by 20th Century Fox in TODD-AO 70mm named “The Sound of Music” starring Julie Andrews which was also a big hit. The Divina Film production company was the most successful in 1950’s Germany. A lot of her own pictures were premiered at the Gloria Palast am Stachus.

The cinema had an organ and featured water fountains in front of the screen curtains. The screen was 92 square metres. The B 12 projectors were by Bauer and a 4-channel stereophonic sound system was by Klangfilm/Perspecta. Many national and international film premieres took place at the Gloria Palast. The theatre is part of the Filmfestival Munich and other film festivals. In 1995 Filmtheaterbetriebe Georg Reiss operated the cinema. In 1997 Omniplex FTB took over. In 2004 the Kinopolis Management Multiplex GmbH operated by Geog Theile took over. In 2012 the seating capacity was reduced to 240, with 192 in the orchestra and 487 in the balcony and the cinema was given a luxurious makeover. On 19th December 2012 it reopened as the Gloria Premium Palast am Stachus. Around 2013 a small cafe was opened in the front of the cinema named Kubaschweski.