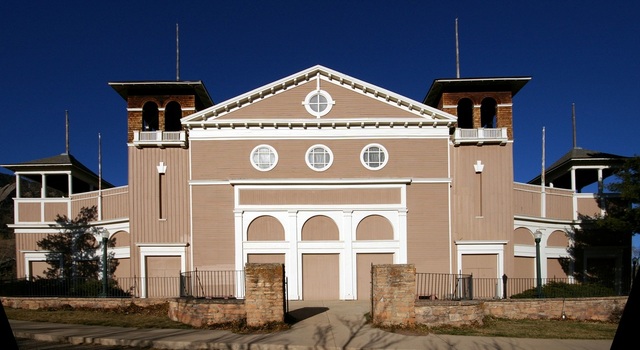 Heated and cooled by Mother Nature, the Chautauqua Auditorium is open from May through September and is a preferred performance venue by artists because of its incredible acoustics and unique architecture. Distinguished speakers such as William Jennings Bryant, Al Gore and the Reverend Jesse Jackson and a diverse array of performers ranging from the Reverend Billy Sunday and music legends such as Wynton Marsalis, Lyle Lovett, Joan Baez, Mary Chapin Carpenter, Joan Armatrading, Chris Isaak, The Indigo Girls, John Hiatt, Los Lobos, and many more, have graced its stage over the last 115 years.

Sometimes fondly referred to as “the barn,” the Chautauqua Auditorium was erected in 45 days for $6,700 and opened on July 4, 1898, as the tabernacle for the new Colorado Chautauqua. Before the 1899 season, panels that slide upward on ropes and pulleys were installed on the middle sections of the building and hinged double doors were fitted on the east and west ends of the wings to control the dust and wind.

The interior of the structure has witnessed only minimal modifications and remains lofty and open, with only unfinished timber supports interrupting the space and single piece beams of Oregon fir spanning the 80 feet expanse above. Originally, the Auditorium was built to accommodate 6,000 patrons with banks of risers built on the stage. In 1905, the bleachers were removed and replaced with dressing rooms at stage left and right and seats have replaced the original bleachers (with the exception of some benches in the general admission section).

The Chautauqua Auditorium was placed on the National Register of Historic Places in 1974.

The Chautauqua still screens films and has a very popular silent fun series. The original nitrate era steel projection booth is still perched on the back wall. The booth originally contained 2 35mm projectors. These were removed at some point within the last 30 years and replaced with 2 portable 16mm machines which have given way to digital gear in the past few years.