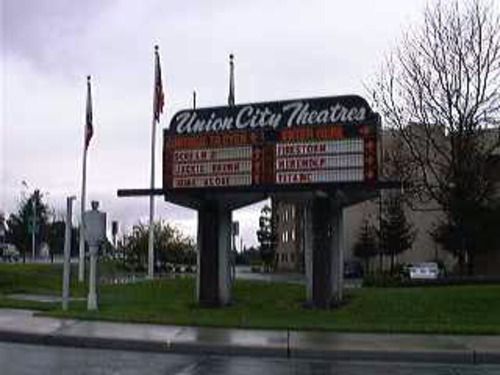 Once popular drive-in off the Nimitz Freeway at Alvarado-Niles Road, was opened originally by Syufy Enterprises (later Century Theatres) on March 30, 1966 as a single screen drive-in. The opening program was Candice Bergan in “The Group” and Peter Sellers in “What’s New Pussycat?” The fare was largely first-run films.

Over time, it grew to a twin screen and later six screens. The drive-in closed March 31, 1998 and was immediately demolished. In its place, the Union Landing shopping center replaced it. Century Theatres now operates a popular 25 screen stadium theater on this site.

The Solano is now closed, leaving the Capitol 6 as the last Drive-in in the Bay Area

Here is an undated photo:
http://tinyurl.com/n3perm

Some corrections to some of the above comments as trained as a manager @ this drive-in (as well as worked at Coliseum i ‘82 and managed Island & Century Almaden in '85):

The Century 25 @ Union Landing opened 11/98 (I was there when it opened). The drive-in closed about a year prior.

Hard to believe that no decent pictures of this drive in exists. The Union City was one of my favorite drive-ins.

We have a boat load of photos at Cinematour.com

Scott, Thanks for the big heads up. I didn’t know about that side before.

I believe the Union City Drive-In theater closed on March 31st 1998 after they showed re-releases of classic 1950s and 60s movies which was the titled “The Last Picture Show” on a Tuesday and quickly the drive-in was demolished the next day on April 1st on a Wednesday. Despite what that person wrote saying that the drive-in closed his funfare in 2000 which was not 2000, it was 1998 as I know this since I’m from the Bay Area. The Century 25 Theater was already open and showing movies by 2000 as it officially opened in around May 1999 when the very first movie I saw there was Star Wars Episode 1 The Phantom Menace as it was probably everyone else’s first movie if I’m not mistaken it was grand opening first movie in 1999 during it’s official theatrical release.

I’m posting this in the hopes that someone sees it who can help. Back in the 1970s the Union City Drive-In featured an advertisement for the Winchester Mystery House that played after coming attractions. It was VERY scary to those of us who were little ones in those days, because it was very well made. The most famous part was a woman intoning “Keeeeep buiiiildiiiing…keeeep buiiiildiiiing….” in the background.

If you have, or know where I can find, a copy of this ad I would love to get my hands on it. Feel free to contact me via e-mail at…

This opened on March 30th, 1966. Grand opening ad in the photo section.