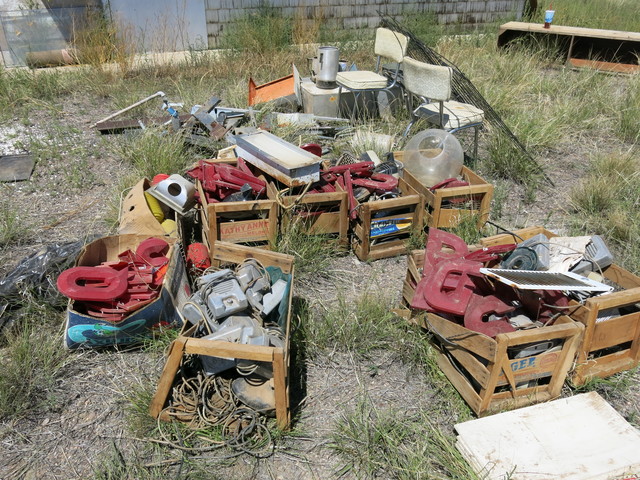 The Frontier Drive-In was opened on May 14, 1955 with Edmond O'Brien in “Warpath”. It was operated by Herbert Gumper. It was closed around 1985. Still standing completely intact as of March, 2014.

Stumbled across the ruins of the New Frontier Drive In outside of of Center, Colorado while cruising the highway – new pictures in the Photo section. Wonder who got the marquee? No sign of it on the grounds.

Wonder if it showed any of the Star Trek movies?

The International Motion Picture Almanac said in its 1978 edition that the “New Frontier” was run by E. Bohn, though Edwin Bohn’s obituary called it just the Frontier. Anyway, it fell off the IMPA drive-in list between the 1984 and 1986 editions, so that’s probably when it closed.

The Frontier debuted in the 1956 edition of the Motion Picture Almanac series, listed as owned by Herbert Gumper. It fell off the MPA list in 1985.

The Frontier Drive-In held its grand opening on Saturday, May 14, 1955, based on a front-page story in the previous day’s issue of the Monte Vista Journal. Admission was free for the opening, which featured the movie “Warpath”.

The drive-in was described “eleven miles north of Monte Vista on the Gunbarrel,” the locals' name for US 285, which has no curves in that stretch. It was owned by Herb and Theta Gumpers, who also owned the Center Theatre, the La Jara Theatre, and the Round-Up Drive-In in La Jara.

“Gumpers has constructed the theatre screen and installations himself.” The screen was 44x80 feet, and the lot held 320 cars. Walter Nichols was the manager.