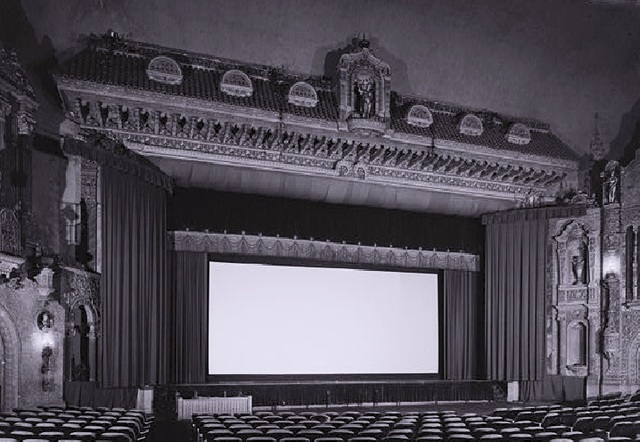 One of the greatest of John Eberson’s theatres and considered to be “the finest Theatre in the South” when opened on September 1, 1928, as the Loew’s and United Artists Theatre with William Haines in “Excess Baggage”. It was equipped with a Wurlitzer organ which was opened by organist H. Haden Read. The original seating capacity was for 3,273. From around 1950, it had been renamed Loew’s Palace Theatre.

Now operating as the Louisville Palace Theatre since 1994. Seating capacity is today 2,800. The Palace Theatre offers a wide variety of contemporary entertainment and Broadway touring productions as well as the local Symphony Orchestra’s Pops series.

This theatre has had four renovations, all prior to 1974: in 1953, a new wide screen was installed; in late-1954, it was bought and renamed United Artists Theatre; in 1963, the balcony was blocked off and a second floor screen was installed and renamed the Penthouse Theatre (since returned to a single auditorium). In 1964, the Wurlitzer organ was renovated.

The UA 150 theatre in Seattle that was built in the 60’s had a very large curved screen. Sadly this great place was torn down a few years ago. Star Wars premiered there for Seattle and placed for months. D150 was almost as wonderful as Cinerama in my opinion. Wish it still existed.

Still haven’t seen this Eberson though hope to after the renovations!

Functions should also include: Movies (classic)

Even though your post was from 8 years ago, it still put a smile on my face today!

Here’s a new 4-page 50th anniversary FIDDLER ON THE ROOF retrospective featuring a roadshow playdate chronology and historian Q&A. The United Artists’ run is mentioned in the piece.

A beautiful theatre that I hope to visit in 2022.