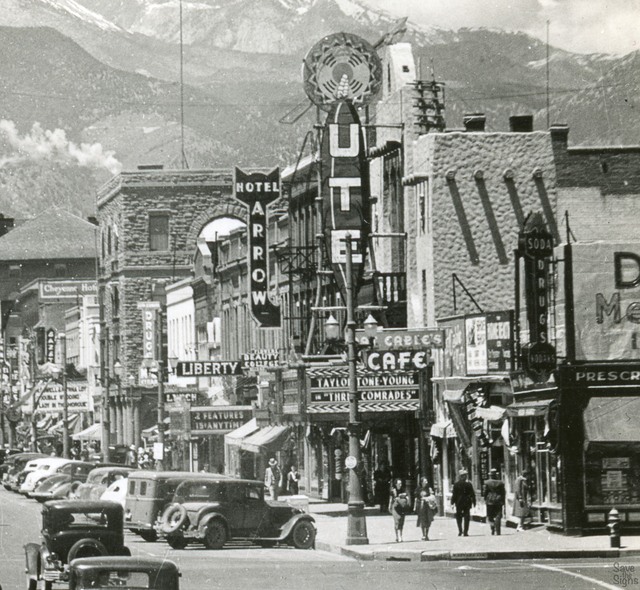 The Liberty Theatre in Colorado Springs was mentioned in the September 7, 1918, issue of The Moving Picture World. It was on a list of houses that had booked Goldwyn productions that year.

This photo, dated around 1921, shows the vertical sign of the Liberty Theatre on Pikes Peak Avenue, a few doors down from the Princess Theatre. The Princess was either an earlier name for the house that was later the Rialto and then the Ute Theatre, or was demolished to make way for that later house.

The Liberty appears to have been in the Arrow Hotel building, which was almost directly across the street from the later Pike Theatre. As the Ute was at 126 and the Pike at 115 E. Pikes Peak Avenue, I’d guess the Liberty was at approximately 112 E. Pikes Peak.

“The Liberty” theatre opened on Tuesday, February 12, 1918. It was actually not a new theatre — it was the old “Pike” theatre but with a new name.

On page 10 of the February 123, 1918 Colorado Springs Gazette was an ad for the new Liberty theatre:

We appreciate your liberal support in the past. We solicit your continued patronage. Our efforts shall always be the best in motion pictures, the best in music, the most courteous treatment.

Kitty Gordon
in
‘The Divine Sacrifice’ "

This is the same Tompkins (J. “Tommy” Tompkins) who would later build and operate the Tompkins Theatre in Colorado Springs.

The Liberty theatre’s final performances took place on September 15, 1940. The pictures showing that day were “Cowboy From Brooklyn” and “The Gladiator”.

G. A. Loveland, manager of the Odeon Theatre, Colorado Springs, Colo., has just purchased one of the largest size Seeburg-Smith unit organs, of the J. P. Seeburg Piano Co. The regular method generally used in installing theatre organs is to have the instrument complete on one side of the proscenium arch, but in this instance the organ is being divided, and installed on both sides of the house. The deal was handled for the Seeburg Co. by Geo. Schulten, manager of the organ department, and this makes the third instrument that he has sold in that territory within the last three months.

The Seeburg Co. is also completing nine Seeburg-Smith unit organs for Pittsburg territory, to be installed in picture houses in that section.

I have some info on the Odeon:

The Odeon was the first of four theatres located just south of the post office. The Odeon address was 17 South Nevada Ave. Later theatres on this site would be the Strand, the Tompkins and the Cooper 1-2-3.

The article announcing the new Odeon theatre was in the Gazette on September 15, 1911, page 1.

The Strand opened on November 7, 1923. The ad announcing this was in the Gazette on that same date, page 9. I don’t have an article that states the last day the Odeon was open, but it might have operated into October or November 1923. The Strand would be torn down in 1929 or 1930 (don’t know exact date) to make way for the Tompkins.

Hi, thanks a lot for this info! Amazing turnover of theatres with four successive theatres on the same lot! Is that some kind of record?!?

Anyway, I hope the Smith organ still exists… maybe it’s in a nearby church, does anybody know?