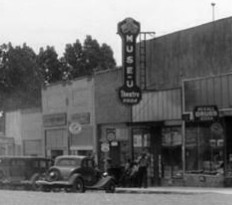 This photo of Main Street in Cortez is dated 1940-1950. The Muse-U theater has no attraction board and the posters on the front are too blurry to read, so the photo can’t be dated by a movie.

The top of the theater’s vertical sign has some sort of drawing I can’t make out, but it looks like the area might once have had a large letter A on it, which would have made the theater name Amuse-U, which was a very common theater name during the silent era. The Muse-U might well have dated back to the 1920s or even earlier, though I haven’t yet found it mentioned in trade journals from the period.

The photo shows that the theater was across Main Street from a single-story, rusticated stone building that is still standing at the northeast corner of Main and Market Streets. The theater’s site is currently occupied by a Sears store which uses the address 1 E. Main Street, but the Sears store extends all the way to the corner of Market Street, while there was a drug store on the corner in the old photo. The next building east of Sears has the number 15 E. Main, so I’d guess the theater’s historic address was probably 7 East Main.

Sears appears to occupy two buildings, including the theater and the former drug store. From what can be seen of the backs of the buildings along the alley they are quite old, and are probably the same buildings that were there in the 1940s photo, but now with a unified modern facade tacked on to their street frontage.