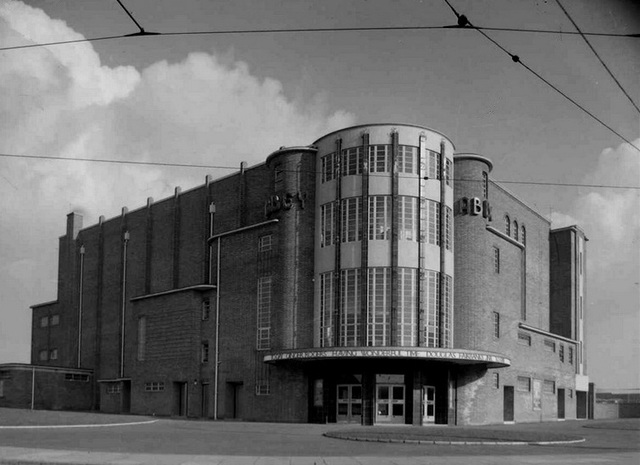 Located in the east Liverpool district of Wavertree. The Abbey Cinema was opened on 4th March 1939 with Irene Dunne in “Joy of Living”. Seating was provided for 1,126 in the stalls and 744 in the circle. The proscenium was 42 feet wide.

The Abbey Cinema was closed on 25th January 1964 for conversion into a Cinerama theatre. A giant curved screen was installed, which hid from view the original proscenium. A new projection suit was built to enable the installation of the 3 Cinerama projectors. The seating capacity was reduced to 1,260. A licensed bar was installed in the circle foyer.

The Abbey Cinerama Theatre opened on 17th March 1964 with “This is Cinerama”, which ran for 7 weeks. “How the West Was Won” was followed by “The Wonderful World of the Brothers Grimm”. The 3-projector system was removed in April 1965, and a single 70mm projector was installed for screenings of “It’s a Mad, Mad, Mad, Mad World. Cinerama 70mm screenings ended on 6th March 1971 after a run of "Song of Norway”. The Abbey Cinerama Theatre still screened many 70mm blockbusters, advertising as ‘on the giant Cinerama screen’. Advance booking facilities ceased on 12th January 1974.

The cinema continued until its final performance on 4th August 1979 with a 70mm presentation of “The Towering Inferno”. The contents of the cinema were put on sale at a public auction.

Lidl announced plans to demolish the former cinema and build a new supermarket on the site. This led to local protest as well as a national protest to save the building especially with its connection with John Lennon who mentioned it in one of his songs. In April 2021 it was recommended to English Heritage to become a Grade II Listed building.

As far as I am concerned ‘The Abbey’ in Liverpool was the best cinema ever built at the time.

The cinema was run by Bedford Cinemas (1928) Ltd run by the Wood family. They ran several cinemas including the Mayfair Aigburth and the Empire Garston.

Originally opened by Regal cinemas and sold to Bedford Cinemas (1928) Ltd. I am told the Beatles often visited the cinema.

It was just a few blocks from George Harrison’s childhood home.