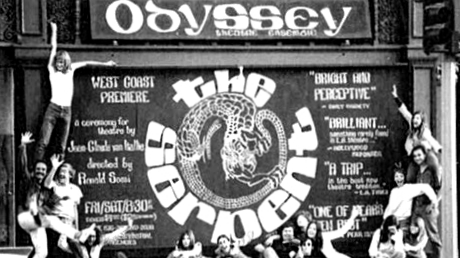 Opened February 11, 1971, to supplement income for the, then cash strapped, Odyssey Theatre Ensemble. The Odyssey Cinema was a storefront art/foreign film theatre. According to a mailer from the period, the theatre offered, “Intimacy, warmth, the comfort of multi level pillow seating, in addition to conventional theatre seating”. The cinema ran nightly shows, with weekend matinees, and Friday/Saturday midnight screenings.

The Odyssey Cinema likely closed prior to 1973, when the Odyssey group moved their live theater operation (located a few doors down from the cinema) to a new venue in West Hollywood.

I think I might have been to this theater, but if I was it was probably no later than 1969, and maybe a year or two earlier. All I recall of the night is that a group of friends took me to see a revival of that version of A Midsummer Night’s Dream in which Mickey Rooney played Puck. I remember it being a tiny storefront theater on the south side of Hollywood Boulevard some distance east of the freeway.

It was on the ground floor of a fairly large old building, and I think there was some fancy grillwork over the storefront such as this building has. If it wasn’t this theater, then there was another, similar storefront house somewhere along this stretch of the boulevard around the same time. I have no memory of the theater’s name, though.

(Here is a street view. The one on our page is trapped in a restaurant in the next block and you can’t get to the street from it. I’ve seen this Street View glitch on a couple of other Cinema Treasures pages recently, but I can’t remember which ones. It’s very annoying.)

Regarding Google Street Views going inside buildings, it seems to be a growing trend, and something we cannot control.

The Odyssey Theatre Ensemble was founded in 1969 (they’re still around). While not providing a year, the newsletter recounts the group’s productions of “Three Penny Opera” and “The Serpent”, followed by three months of inactivity/hardship, and a pending “February 11” opening for the cinema. A search online came up with their Serpent production taking place in the Spring/Summer of 1970. So, I’m assuming the cinema opened on February 11, 1971.

I think 1971 would have been too late. I wonder if somebody else ran a movie theater in the space before Odyssey moved in? That grille really looks familiar.

The thing with Google’s street views is very odd. The restaurant our image is trapped in isn’t even at the right address, and the address works fine at Google Maps itself. It must be some sort of error in their software that fetches the image to embed in our page.