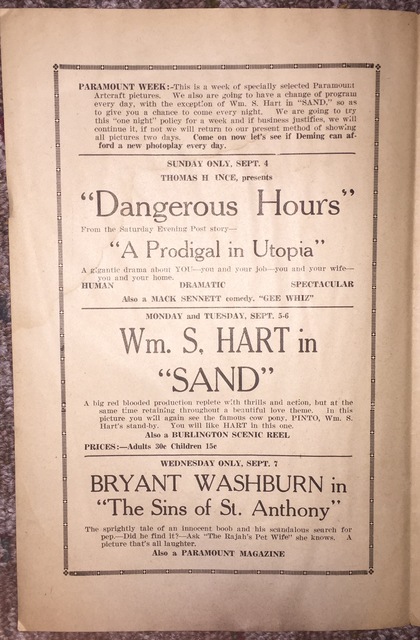 It was operated by Griffith Amusement Company in 1937 and was renamed Luna Theatre following a remodel by architectural firm Corgan & Moore. It was closed around 1953. It reopened in 1956, again operated by Griffiths Theatres, who in 1960 became Frontier Theatres, and they closed it in 1964.

An ad appearing in The Deming Headlight in September, 1918, said that James Carragien would commemorate the first anniversary of his Princess Theatre by installing a $10,000 pipe organ. Carragien had also taken over the Isis Theatre, next door to the Princess, in April, 1918.

Checking the Film Daily Yearbook, I’ve found that the Luna Theatre was not listed in 1954 or 1955, but reappears in 1956, and is listed under Griffith Theatres or Frontier Theatres (Griffith was renamed about 1960) in the Circuits section as late as 1964. Griffith might have closed the Luna for a couple of years due to the cost of converting for CinemaScope, and then reopened it. 1954 is the year the Mimbres Drive-In appears in the listings, so the chain would still have had two theaters in Luna County while the Luna was closed.

An article in the October 2, 1936, issue of The Deming Headlight said that the Princess Theatre had been taken over by Griffith Theatres and would be closed for several weeks for extensive rebuilding. The floor would be rebuilt and a balcony added. The house was also to be renamed. The architect for the project was Gates Corgan, with Bill Moore of Fairfax, Oklahoma, acting as supervising architect.

It has only just occurred to me that the Bill Moore of Fairfax, Oklahoma, who supervised the rebuilding of the Luna Theatre for architect Gates Corgan in 1936 was probably the William J. Moore who became the partner of Corgan’s son Jack in the firm of Corgan & Moore.