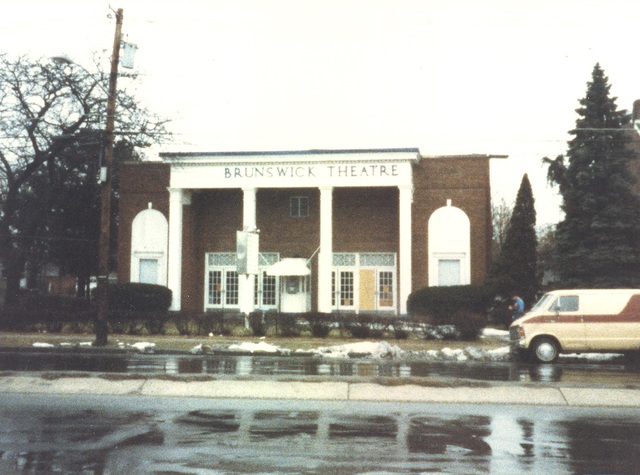 The RKO Brunswick Theater was built during WW II (1942) on the edge of the city limits in the North Trenton section near the Brunswick Circle. It remained a single theater throughout its run and closed simultaneously with the Trent Theater and Lincoln Theater when RKO pulled out of central NJ in October, 1972.

The theater featured art and foreign movies in the 1960’s, second-run and double features in the 1970’s. Eventually, X-rated films were featured. The City of Trenton became an unlikely owner when back taxes were not paid.

There was no theater organ. The building was set back about 35 feet from the street and feature a stand-alone sign rather than a standard marquee afixed to the building.

The theater closed in the early-1980’s and was demolished in 1996. A nursing home was built on the grounds. Several sconces, seats, and part of the façade were removed before its demolition.

When I was a student at Temple University around 1986 I was able to get “Salvage Rights” for some of the equipment for the Temple Cinema “SAC Cinema” Their ticket machine was used by the cinema for several years afterwards. Also, we ended up with the projector lenses, film counter, and winder.

I know that the last films shown were “Kinky Business” and “Passions”.

One badly damaged reel of which ended up at Temple’s Cinema. haha.

Here is a picture that I took of the outside. I have some more of the inside if you are interested.

please post your photos. the scanned quality is great!

Wow…. Those pictures put me right back at the Brunswick! I wished that I brought a camera back then. I’m pretty sure that it had “RKO” Brunswick on the front. ….Thank You!

I HAD WORKED AT THE BRUNSWICK THEATER AS A PROJECTIONIST WHEN IT WAS AN X-RATED THEATER. I REMEMBER ALL OF THE GOOD TIMES THAT I HAD THERE. I REMEMBER THE MANAGERS NAME AT THE TIME WAS DORIS HESS. SHE WAS GOOD TO ME. MY NAME WAS RUSS RIDGWAY AND MY COUSIN WAS THE RELIEF PROJECTIONIST, HIS NAME IS KEN RIDGWAY JR. THAT WAS ONE OF THE BEST TIMES OF MY LIFE.

Different look for a theatre,one you don’t see often.

You are right Mike looks more like a bank or resturant to me.Great booth photos.

I worked part-time at the Brunswick as a projectionist in the mid-late 70’s when it was an x-rated theater. I worked there up until I left to teach (how’s that for a strange occupation change?). I also remember Doris Hess, I worked there with Don Reynolds and Joe Neuhof.

An article about the Brunswick Theatre begins on this page of the January 3, 1942, issue of Boxoffice.