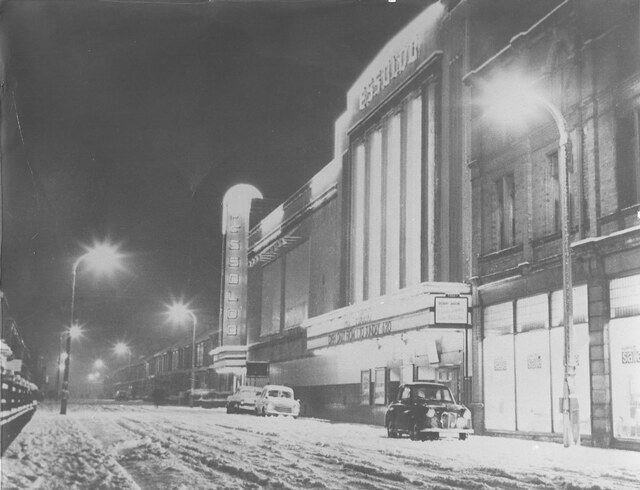 Located in Blyth, Northumberland, at the corner of Beaconsfield Street and Carlton Street. Built on the site of the Empire Cinema (1911-1937) which has its own page on Cinema Treasures. The Blyth Essoldo was the first purpose built Essoldo cinema to open (although the circuits' flagship cinema Newcastle upon Tyne Essoldo had been planned prior to this, but there were delays in obtaining building materials for that building and it didn’t open until 29th August 1938). The Blyth Essoldo opened on 11th July 1938 with Frederic March in “The Buccaneer”. Designed by architect Edwin M. Lawson, the interior decorations were by noted interior designer John Alexander. Seating was provided in stalls and circle levels. It was equipped with a Western Electric(WE) sound system.

The Essoldo was equipped with CinemaScope and full stereophonic sound in 1954. The Essoldo chain was sold to the London based Classic Cinemas chain on 2nd April 1972 and they renamed the Essoldo Blyth the Tatler Cinema Club screening uncensored adult films. (Classic also took over the towns' Wallaw Cinema on the same day). Life as a sex cinema was a short lived venture as the Tatler Cinema Club was closed on 3rd November 1973.

The building was converted into a skateboard centre. It was demolished in August & September 1980. A new Methodist Church has been built on the site.

The ‘Wallaw’ Cinema was never renamed ‘Classic’ as when, in 1955, the original owner/operator, Walter Lawson, sold the building to ABC, he had a clause inserted in the sale contract stating that the name ‘Wallaw’ was to be retained. ABC did have their triangular Company Logo on the front of house to indicate clearly that whilst the cinema’s name was ‘Wallaw’ it was indeed part of the Associated British Cinemas Circuit.

When ABC leased the building to Arnold Scheckman in 1970 the same conditions applied and when, in turn, he leased it to Classic Cinemas early in 1972 (together with the Apollo Newcastle and the Princes North Shields)they continued to operate it as the ‘Wallaw’. This, by the way, was a few months before the takeover of the Essoldo circuit by Classic Cinemas.

So, ironically, for a brief period in the early 1970’s Classic had two large cinemas in Blyth – but neither were ever to be given the Company Name.

I managed to look around the Essoldo just before it’s demolition. I spent a very enjoyable Saturday afternoon exploring the building. I managed to get a few photo’s but I unfortunately they weren’t that good as I was learning photography at the time. Amazing magical building with fantastic art deco design. The architect was Edwin Lawson who designed the Black’s Regal / Odeon cinemas in Sunderland, Byker, Gateshead and South Shields.I would love to see some interior photos. I have a few exterior photos of the building both open and closed and an artists impression of the interior by John Alwxander who designed the interior scheme.

That last name should read John Alexander, he was responsible for a lot of cinema interiors, especially around the north east of england.

Blyth library have an 1938 opening programme on file.