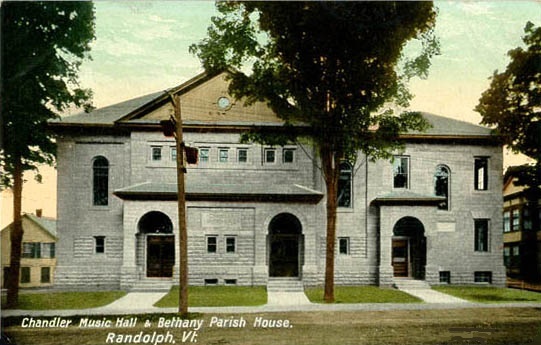 The 800-seat Chandler Music Hall was opened in 1907. During the 1910’s and 1920’s it was used to screen silent films, as well as other entertainments. Used for concerts and live performances, it also screens films September thru April.

Here is a brief article about the Chandler Music Hall from the June, 1910, issue of the construction trade journal Concrete:

“The building was given to the city by Col. A. B. Chandler and was recently opened with impressive ceremony. The structure was designed by Architect E. N. Boyden, Boston, Mass. It is built of hollow concrete block, 27,946 block being used. The building is divided into a music hall 88'x1OO' and a parish house 30'x100'. The hall seats 800 people. The total cost of the structure, including seats and stage fittings, was $30,000.

“Mr. Teachout was assisted in the construction by J. O. Dubuke. The Teachout block plant at Essex Junction is equipped with ‘Hercules’ block machines and turns out very creditable products.”E. N. Boyden was probably the son of Elbridge C. Boyden, one of the leading architects in Worcester, Massachusetts in the last half of the 19th century. The younger Boyden is best known for a number of houses he designed in Boston’s Back Bay district.