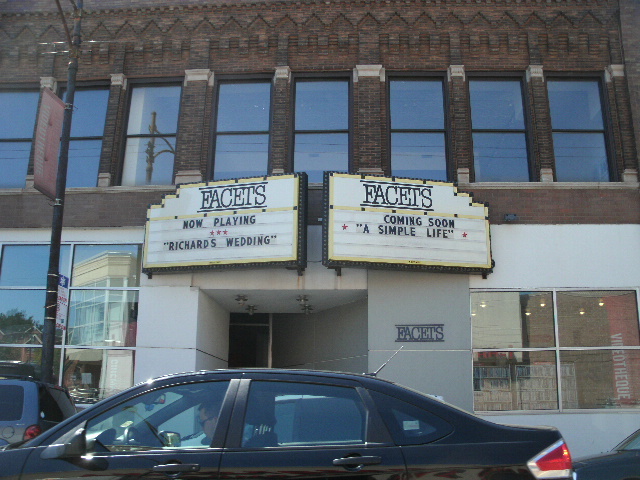 Founded in 1975, Facets Cinemathque is one of the best venues in all of Chicago for independent films, both American and foreign. It houses two auditoriums, the main 125 seater for film and a tiny 35-seat one for video.

In addition, Facets Cinemathque is equally as celebrated for its huge Videotheque, in the lobby, a collection of close to 50,000 titles on video and DVD available for purchase or rental.

Recent renovations to the building, located not far from the campus of DePaul University, include a new, simple marquee and a new concession stand outside the main auditorium.

Yes, I agree that Facets has some of the best programming in the city; however, the presentation here is seriously lacking. The projection is very poor and the mono sound is bad. My home theater system at home is miles better than what is offered here. As a comparison, the Gene Siskel Film Center offers similar programming and their presentation is state of the art. Facets would really be a great desitnation if only they put some money into their facility.

The folks at Facets are quite knowledgable. They’ve been able to find VHS copies of some pretty rare films over the years. “Stony Island” shot in Chicago, etc. Haven’t benn there in a while, but send people there when they are searching for the obscure. Only saw one movie in the theatre portion as I recall. An Asian spy/action film with Lesbian heroines. Maybe late 89 or90.

The seats in Facets look like they come from an older cinema. Anyone have a comment on that?

Facets is a true Chicago TREASURE. I don’t see how anyone can complain – you get films here you wouldn’t be able to see any where else. Why don’t they spend money on this place? What? Give them some money to spend. Help promote this gem. I went here as a teen and it enriched my life and it should be enriching more lives. Don’t talk to me about sound or seats – this place has an IMPACT.