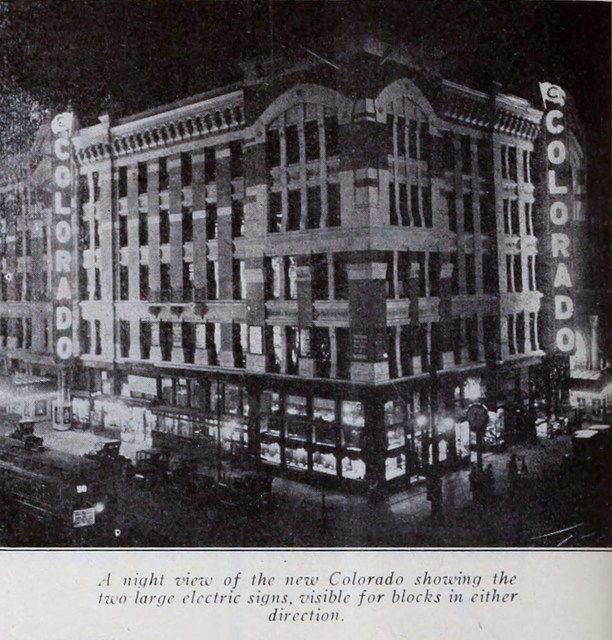 The Colorado Theatre was open in 1926.

Assuming that the name was moved after the Tabor reclaimed its original name, we would need an address for the later Colorado to find out if we already have it listed at Cinema Treasures under yet another, later name. Until then I guess this page is sort of in theater limbo. Does anybody have any clues about this mystery house?

Thanks, Ron. We don’t have the Colonial listed, nor any theater at 1629 Curtis, so that must be the correct address for this second Colorado Theatre.

The Colorado vertical is clear in one of Ron’s photos so we know it existed so I wouldn’t call it a Mystery House.

It was a mystery on Sunday Morning, but Ron cleared it up that afternoon. The vertical in the photo was on the first Colorado Theatre, aka Tabor Grand Opera House. The smaller Colorado appears in both photos as the Colonial Theatre, which was renamed the Colorado sometime between 1930, when the Tabor went back to its original name, and 1933, when the Colorado was listed in the city directory at 1629 Curtis, the Colonial’s old address. That was the mystery- why the seating capacity dropped so drastically from the 1920s to the 1930s- and the solution was that the name was moved from a big theater to a small one.

All but one of the photos currently on this theater’s photo page show the Tabor Grand Opera House during the 1920s, when it was called the Colorado Theatre.

This far smaller house at 1629 Curtis was called the Colonial Theatre. Some time after the Tabor Grand returned to its original name, which was around 1930, the Colonial was renamed the Colorado. This had been done by 1933, but I’ve been unable to discover exactly when.

The Colonial Theatre was in operation by 1916, when it was one of the eight theaters then located on the two-block stretch of Curtis Street between Fifteenth and Seventeenth Street that were mentioned by name in the July 15 issue of The Moving Picture World.

The one photo we currently have that depicts the Colonial is the one uploaded by Ron Pierce on March 30, 2015. It is an evening shot of Curtis Street with the illuminated vertical signs of all the theaters blazing, including, in the distance, the “Colorado” vertical on the Tabor Grand. The Colonial is in the right foreground, next door to the Empress and across the street from the Strand.

Actually, the photo just uploaded by DavidZornig does show the Colonial’s sign, in the distant left, just beyond the much larger sign of the Empress, but it is so pale that I doubt anybody could read it if they didn’t already know that it said Colonial.

There is a 3-page article, including photos, about the Colorado Theatre on the Internet Archive at: https://archive.org/stream/motionpicturenew25marc#page/2474.

Mike, the 1922 article you linked to is about a different Colorado Theatre, which is listed at Cinema Treasures under its earlier (and later) name, Tabor Grand Opera House. It was called the Colorado Theatre in the 1920s.

This page is about the later Colorado Theatre, formerly called the Colonial, which was renamed the Colorado sometime in the early 1930s.