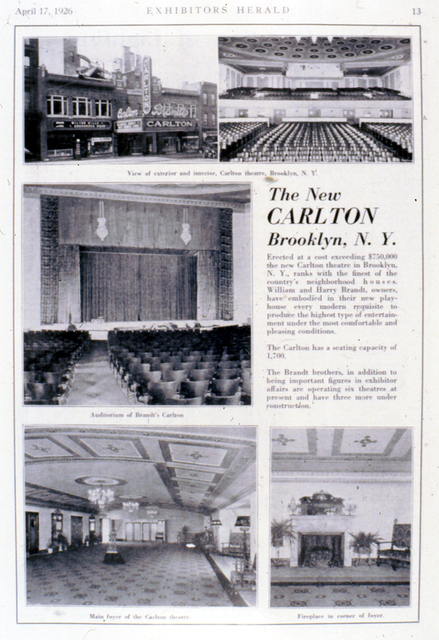 Built on the site of an earlier (1911) Carlton Theatre that had 450 seats. In 1913 an airdome theatre was added. These were both closed on 10th May 1925 and were demolished (apart from the main facade). The new Carlton Theatre opened on February 8th, 1926 and was operated by the Brandt Circuit. It had a 1,124 seat airdome theatre on the roof that was decorated in an Italianate style.

It was named for nearby Carlton Place, yet it stood on Flatbush Avenue at Seventh Avenue, a block north of the Flatbush Pavillion (formerly the Plaza). The theatre had a balcony, and in its later days ran kung-fu and blaxploitation movies.

It closed in the early-1980’s and became the first theater to converted into a church by the Brooklyn Tabernacle, which later moved into the far more spacious former Metropolitan Theater. The Carlton Theatre was demolished in 2004.

lostmemory; Harrison G. Wiseman is one architect, that we can establish as fact. I note that the two films listed as playing on the 1926 photograph are dated 1925 on the Internet Movie Database, so if they were released early in 1926, they could be opening programmes or soon after the 8th Feb 1926 opening.

The marquee in the ‘earlier’ photograph is certainly different. I believe that the marquee was added too underneath to allow for the attractions letters in 1926. The poster cases on each side of the entrance are empty. Could this be a pre-opening 1914 photo taken a few weeks prior to opening? Regarding the missing stairs to the roof garden theatre and no sign of the auditorium block beyond the facade on the photo, I believe the original 1914 Carlton theatre was a much smaller building, lower in height than the later auditorium that was built on the site.

I have now discovered that the original Carlton Theatre opened in early January 1911. It had a seating capacity of 450. The airdome opened in 1913. Both closed on 10th May 1925 to be demolished and the new Carlton Theatre was built on the site, opening on 8th February 1926. It looks like the facade was retained, possibly because it contained a couple of retail units that would continue to provide revenue in rent.

Of course this may date the 1914 photograph (that lostmemory posted earlier today) to late 1910, just prior to opening?

My Brooklyn will never make a comeback again, now that they are constructing apartment skyscrapers on residential side streets in the South Slope. My block has an 8 story phallic symbol which will forever block out the sun from my front door. The site of the former 16th Street Theater below 5th Avenue has one now that went up FAST. Brooklyn is now Manhattan. At one time there were at least 6 movie theaters within walking distance of my home. Now there’s ONE. On a recent Monday night I went there to see “Akeela and the Bee” in the largest division at the Pavilion —– I was the ONLY ONE THERE ! The movie was wonderful, but —– maybe it’s not just the developers.

From a distance View link

I actually once visited this place during its church years. I friend was trying to convert me – alas to no avail. While I was not into old movie theaters at the time, the place seemed quite impressive – and the Brooklyn Tabernacle people presented a pretty good show. They have a GREAT chorus. So the old theater was crtainly used to great avail.

The links on this page show some great vintage photos of the Carlton. It seems Brooklyn had so many classic movie theaters that are now gone.

I was born in 1953 and saw a number of movies at the Carlton. My mother worked at “Neumans” Ice cream parlor next door to the Carlton and my Father worked at the “Rustic Inn” which was just around the corner on Prospect Place. What I remember most about this theatre was going to the Rest Rooms down stairs from the main entry – everything was marble

This was probably either Hugo Taussig, or Hugo Magnuson of the firm Magnuson & Kleinert. Wiseman worked with both at various times following the 1920 death of his partner Arthur Carlson.

As the C/O for the Carlton names only two architects, it was probably Taussig who worked with Wiseman on this house. In any case, the firm of Carlson & Wiseman was long gone by the time the Carlton Theatre was designed.

Stay tuned, folks! The Wurlitzer Style H 2/10 from this theater will be installed in the fellowship hall of my church in Waukegan, IL. It was removed before the theater was torn down, and has been in storage since then. It is in EXCELLENT condition and is very complete, and will have a full historic restoration. If any of you have pictures of the organ in the theater, we’d sure love to see them.