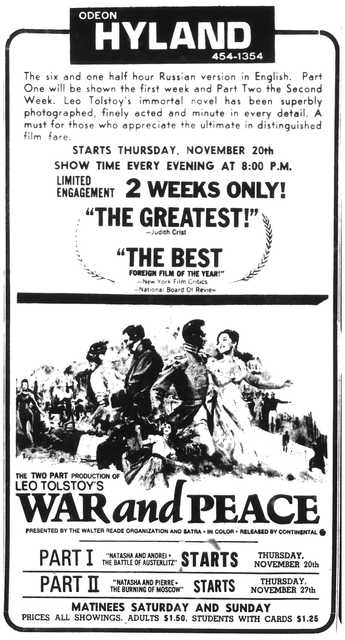 Located next to the Armdale Rotary (now the Armdale Roundabout), The Hyland Theatre was opened on 7th October 1955, by Odeon Theatres, with the British submarine drama “Above Us the Waves”, starring John Mills. The Gala Opening featured a performance by the HMCS Stadacona Band, and Royal Canadian Navy displays including a 16-foot model of the then-new HMCS St. Laurent, a “diver’s eye view of the ocean floor,” and diving and navy equipment.

The theatre was taken over by Empire Theatres, along with the Oxford Theatre and Casino Theatre, in 1984. Empire continued to operate the Hyland Theatre as a single-screen theatre.

On Friday, 24th April 1992, just before 1pm, a ‘faulty’ popcorn machine caused a fire, which quickly spread throughout the theatre, creating a ‘backdraft’ condition that eventually resulted in a large explosion, causing severe damage to the theatre. Two employees were in the building at the time, but managed to escape without injuries. The movie playing at the time was “City of Joy”, starring Patrick Swayze. In a strange coincidence, one of the last films that played at the Hyland Theatre was Ron Howard’s “Backdraft”.

After the fire, the theatre was demolished, and some of the seats were given to the Theatre Arts Guild, a community theatre. A small park with benches sits on the site today.

I wonder, how long would Empire have kept this theatre open had it not burned down? Considering they closed the Casino down in 1989, I’m sure this one would have been closed by the time Bayers Lake opened?