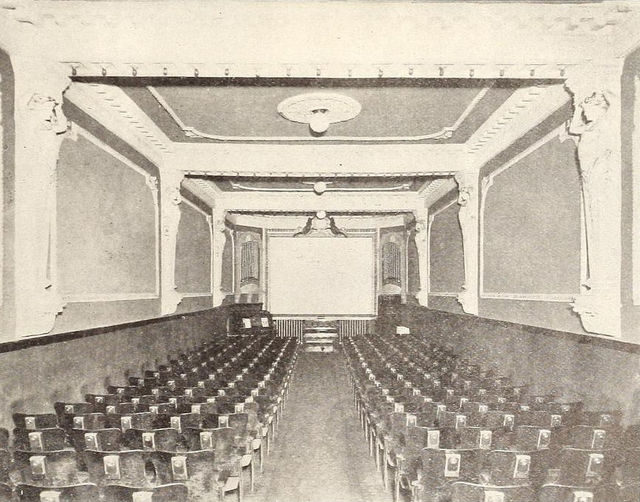 The Alcazar Theatre was one of the Loop’s early movie houses, opening in May 1907, near Chicago’s first Theatre Row, near the intersection of W. Madison Street and N. Clark Street (which was superceded in the 1920’s by the W. Randolph Street “Rialto”, which included such theaters as the Oriental Theatre, the United Artists Theatre and the Woods Theatre). W. Randolph Street is today once more the heart of the city’s revived Theatre District.

“… Two hundred persons in the Alcazar theater at 69 West Madison street were holding their breath for the climax of ‘The Red Virgin’ reel at 10:30 o'clock last night. The silence was intense.
From the operator’s iron box in the rear of the audience came the cry of ‘Fire!’ ‘The Red Virgin’ exploded at the climax. The theater was filled with smoke. The smell of celluloid was suffocating.”

It goes on to say how the entire crowd left the theater in an orderly manner with the conclusion that no one was injured, and, that “Miss Mattie Lamb of 1328 South Spaulding avenue played the piano, although almost overcome by smoke, until the theater was empty.”

An even EARLIER piece (than that above) from the Chicago Tribune of January 14, 1887, might suggest that the Alcazar Theater is older than originally thought. This is from the Letters to the Editor:

The Alcazar Theatre and Garden.

Chicago, Jan. 13.—–[Editor of The Tribune]—-The constant talk by the Chicago papers of a certain disreputable saloon on State street called the “Alcazar” (oftentimes without mentioning the location) is having a very depressing effect upon my business at my Alcazar Theatre, in which I play legitimate companies only and have always catered to the best people. I dare say that one-half of the people on the West Side know no other “Alcazar” than mine, as every week they get into arguments with my billers regarding the horrible newspaper reports of the “Alcazar.” It is too bad that I should have to suffer severely on account of some low dive bearing the same name. Such pieces as “Uncle Dan'l” and “Mrs. Partington,” by Joseph H. Kean, are not liable to harm any one, and those are the class of dramas I have been playing. If you will kindly place me right upon this point I shall esteem it a great favor.

The August 20, 1910, issue of The Film Index had an article about the four movie theaters then operating in this block of Chicago’s Madison Avenue, including the Alcazar. It said that the Alcazar was the first theater on the block, opening in May, 1907, with 300 seats. Built at a cost of $20,000, the Alcazar was the first Chicago movie theater to install a pipe organ. Rick Altman’s Silent Film Sound identifies this as a five-rank Hinners Organ Company tracker model, installed in 1908.