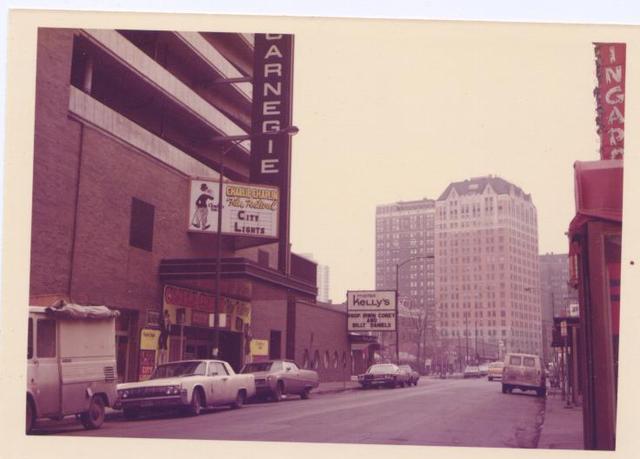 The Carnegie Theatre was located on Rush Street, an area once notorious for its seedy nightclubs, bars, and illicit activities, but today better known for its many eclectic, upscale eating establishments.

The Streamline Moderne-style movie house, opened December 3, 1949 in an existing structure, originally as the Telenews Theatre (another Telenews Theatre, which opened a decade earlier, was located on State Street next door to the Chicago Theatre, and was later known as the Loop Theatre). Just over a month after it opened, the Telenews Theatre dropped its newsreel policy and was renamed the Carnegie Theatre.

The Carnegie Theatre hosted the first Chicago International Film Festival, in 1965, with directors King Vidor and Stanley Kubrick and screen legend Bette Davis on hand to receive awards. In 1966, it suffered damage from a fire which spread from an adjacent restaurant. The building was rebuilt and reopened on October 12, 1967. In its last years, the Carnegie Theatre was screening a mix of both art and commercial movies. “A Man and A Woman” ran for sixty-three weeks and also the Carnegie Theatre had exclusive Chicago premiere runs of “Young Frankenstein” and “Silent Movie”.

The theatre was closed in fall of 1986. A restaurant has since been opened on the site.

And as I vaguely recall, “Monty Pyhton & The Holy Grail” made its Chicago debut here.

“The Graduate” opened here fifty years ago today. The film went on to play six months (day-and-date with the Loop). And here’s a new retrospective article which includes some exhibition history (and other) details to commemorate the classic film’s golden anniversary.

November 21,1979 photo added courtesy of Joe Lynn via Craig Locaciato‎. Steve Dahl & Gary Meier during a live broadcast of The Coho Breakfast Club at the Carnegie Theatre. Steve is breaking a copy of the “Saturday Night Fever” soundtrack over his head.

At 4:58 a brief glimpse of the Carnegie Theatre reconstruction site in 1967, after the 1966 fire. Mister Kelly’s already rebuilt and reopened that May. View of the State Street side after that. Courtesy J.J. Sedelmaier.

State Street backside of the Carnegie in 1965 at 3:11 in the below Facebook video of “Mickey One” courtesy Mister Kelly’s Chicago. The Store a tavern mocked up as Club Xanadu for the film at 2:47 is also the former second location of The Gate of Horn at 1036 N. State.

1964 night shot of the Carnegie marquee at 8:20 in the below video. I never knew the early vertical sign letters swept up and down, because I was too young at the time when we lived around the corner.