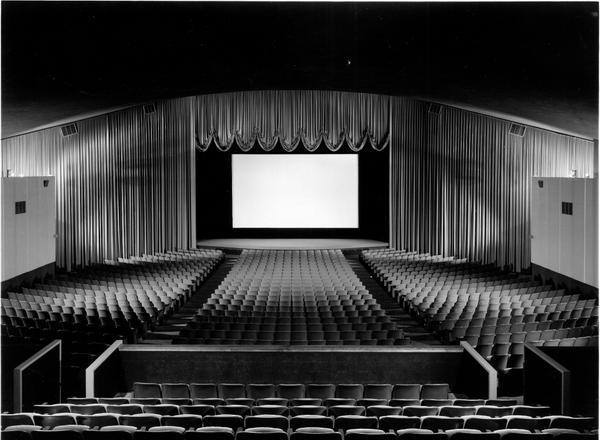 This futuristic-looking classic 1960’s-era movie house was a long-time landmark in suburban Northbrook, visible along the Edens Expressway (for which the theatre was named) and Lake-Cook Road, both of which ran past the Edens Theatre. It was designed by the Chicago-based firm of Perkins and Will.

Built in 1963, and opening on March 8, 1963 with Marcello Mastroianni in “Divorce Italian Style”, the large Edens Theatre was inside a traditional movie theatre, with a huge screen, complete with red curtains and a small stage area. The original color scheme was gold and off-white, with teak panelling.

However, the Edens Theatre exterior was its real stunner, looking like something out of a 1950’s sci-fi movie. It was called the largest “hyperbolic paraboloid” building ever constructed when it opened. The theatre’s concrete roof curved sharply upwards on either end, rising dramatically skyward at each point. Its walls, of corrugated concrete, were broken up by long, undulating swaths of glass, along the entrance areas. The main lobby, which was sunken and reached by sets of stairs, featured then ultra-modern “living room” furniture and artwork.

On November 14, 1969, a slightly smaller (and far more ordinary-looking) second auditorium was built and opened adjacent to the original theatre. The theater was renamed the Edens I & II.

The once enormously popular Edens I & II Theaters was shuttered by its last operator, Cineplex Odeon, in 1994, stating that the cost of refurbishing the aging twin was too prohibitive. The last two films on its marquee were “Time Cop” and “Milk Money”.

It was quickly snatched up by a developer, along with a nearby bowling alley and shops, and all were razed by the end of 1994. The Village Square of Northbrook shopping center now sits on the site of the Edens I & II Theaters.

True, but it did have “stereophonic sound!” The makers of “Star Wars” were, of course, huge innovators in that field.

Some of my fondest memories were seeing “Star Wars” here (and I also saw it at Mt. Prospect General Cinemas, Golf Mill on re-release, and Palwaukee….probably on re-re-release!) and “Superman: The Movie.” One of the theaters, I think Edens II, had these carpeted partitions in the front of the first row. I remember sitting on the floor in front of those things to watch some movies.

re: 70mm, I stand corrected. Sure did seem like it. Edens II was cavernous.

I remember seeing that “coming to your galaxy this summer” poster in the foyer.

The November 14th, 1969 grand opening ad for Edens 2 can be found in the photo section.

Thank you rivest266 for all your postings.

This is a Must Watch.

Northbrook Community Television’s 1-hour documentary on the theatre “Edens Theater: The Life of a Beautiful Bird.”

I recall taking my young cousins to see Annie at Edens II. Not a great film, but it sure did look and sound great there.

From the Chicago Tribune, an article about the closing of the theater.

It started its run in 1963 with “Divorce-Italian Style” and recently ended with showings of “Time Cop” and “Milk Money.”

In between, thousands of moviegoers watched hundreds of films on the huge, old-fashioned big screens of the Edens I and II Theaters along the Edens Expressway between Lake-Cook and Dundee Roads in Northbrook.

“I think I saw every one of the `Star Wars' movies there,” said Village Clerk Lona Louis. “It was nice to have a movie theater so close. In the glory days, it was a nice, big theater to go to.”

The glory days, however, are over. The theaters have been closed and sold to a developer, and they’re being demolished and will be replaced by a shopping mall.

Even those who never ventured into Edens I-a George Jetson-like structure opened 31 years ago-couldn’t miss it as they drove along the Edens Expressway or Skokie Boulevard.

Its swooping, concrete roof, low and flat in the middle and rising up to a point on either end like an old leather saddle, was the world’s largest “hyperbolic paraboloid” structure when it was built as a single-screen theater in 1963. In 1969, the more architecturally subdued Edens II was constructed nearby.

Architect Jack Train was the principal in charge of the project when Edens I was designed by Robert Palmer of the Chicago firm Perkins & Will.

“The people who came to us were old movie families and wanted to build a theater in Northbrook,” Train recalled. “They were also considering a theater where they could have speakers and do readings, and they wanted something unique.

“It seemed like a logical solution was a hyperbolic paraboloid.”

Though the building looked odd, it was economical to build, Train said. The concrete roof was poured in a day. Moreover, it had almost perfect acoustics and distributed air and light well.

But according to Howard Lichtman, a spokesman for the theaters' last operator, Cineplex Odeon, the Edens “was an old facility that didn’t warrant the capital investments to bring it up to snuff.”

“The Edens is an older complex without the modern amenities,” Lichtman said. “It wasn’t your modern multiplex with a state-of-the-art sound and projection system.”

As soon as demolition is completed this month, construction will begin on Market Square, a shopping center that could eventually stretch a half-mile from the theater site north to Lake-Cook Road.

The two theaters will be replaced by five stores, including Performance Bicycles and Kinko’s Copies and a Bertucci’s restaurant. Phase II of the shopping center project, if approved by Northbrook, may include a Builder’s Square, Circuit City and Filene’s Basement.

Though Northbrook is again without its own cinemas, that may change too, said Village Manager John Novinson.

“Somewhere down the road, this community will get theaters,” Novinson said. “There’s already talk of a new location in town.

The popular podcast “Rebel Force Radio” references this theater, as well as its predecessor, “The Forcecast”, since one of the main hosts of the show grew up near this venue and saw his first star wars movie there, “Return of the Jedi”. 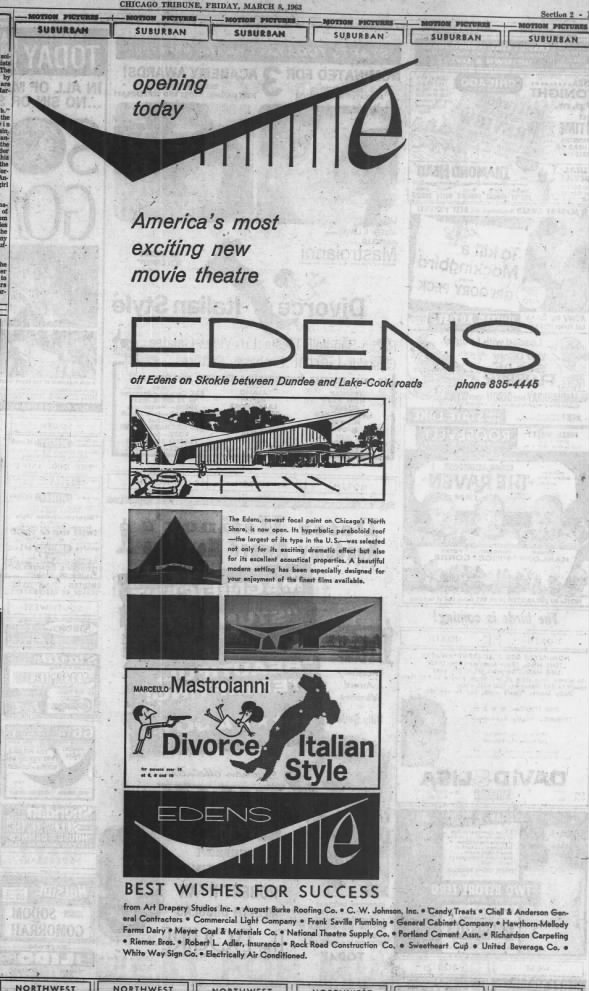 Eden Theatre architect Jack Train, FAIA, a founding principal of Valerio Dewalt Train Associates in Chicago, died on March 17, 2014 at 91. He was known for his technical and design excellence, along with his many contributions the architecture profession. He spent the first 20 years of his career with Skidmore, Owings & Merrill, where he designed the award-winning US Air Force Academy in Colorado Springs and Inland Steel Building in Chicago. In 1966, he was a principal of Metz, Train, Olson & Youngren; ten years later the firm became Metz, Train & Youngren. In 1982, he founded Jack Train Associates and in 1993 brought longtime colleague Mark Dewalt on board. A year later, the pair teamed with Joseph Valerio to become Valerio Dewalt Train Associates. Train was the firm’s president until his retirement in 1998, after which he was named principal emeritus. Jack Train was actively involved with the American Institute of Architects (AIA) on the local, state, and national levels, served as its Chicago Chapter president from 1962 to 1964, and was the first president of AIA Illinois (then known as the Illinois AIA Council) and later its chairman. He also chaired several task forces and committees at the national level. In 1974, Train received that year’s Edward C. Kemper Award for outstanding service to the profession. He also wrote “The Unsung Essentials of Architecture” on the business of architecture. Train was survived by his wife Virginia; children Jack, Barbara, and Pamela; eight grandchildren; and four great-grandchildren.