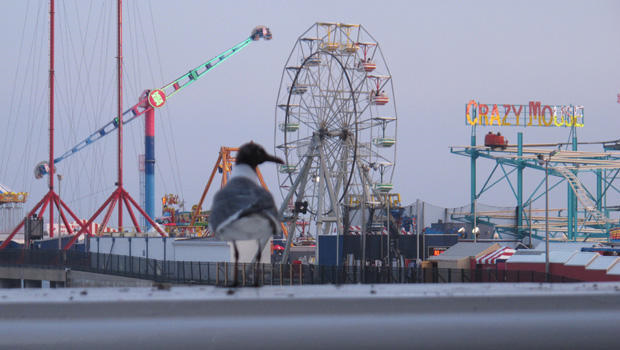 Actually David all of Atlantic City was. Overview info has been updated. Thanks CT.

“Steel Pier featured every great entertainer of their day from Frank Sinatra to Al Jolson to The Beatles”. The Beatles never played Steel Pier (unless you count their films, Hard Days Night and Help). The Beatles did play Convention Hall. I wonder what the current owners have in mind when they say “restore to its former glory”? I would doubt we will ever see the return of movies, big name live entertainment, etc to the Pier….but you never know. Except for the IMAX at one of the Casino/Hotels there are no more movie theaters in Atlantic City (or Ventnor or Margate). I don’t think that is going to change anytime soon.

I would think that bringing in big name entertainment might work. I am not sure if any of the hotels have big name shows like Vegas they didn’t when they first opened, but I bet the one thing they do bring back is the high diving horse.

Mikeoaklandpark, the current owners of the Steel Pier announced they were bringing the diving horse back in 2012. They dropped the idea within two weeks due to massive public outcry.

This was their second attempt, when they were just leasing the Pier in 1993, they hired an outfit called High Diving Mules to perform. In that performance, a mule, dog and miniature horse did the diving. Public objection was such that the act was cancelled after several weeks. I don’t think that attitude will change anytime in the foreseeable future.

Hard Rock International, who took over the Taj Mahal, will have two venues equipped for live entertainment with over 7,000 seats between them. As that complex is still connected to the Steel Pier by a bridge over the boardwalk, I doubt the Pier owners will invest millions to place another live venue that near. More than likely they will strive to make it a first class amusement park, like they’ve been doing for the last 25 years or so.

Being a Jersey kid who remembers the Atlantic City of a different era, I would like to see the pier host live and filmed entertainment again, but like Cinedelphia, I doubt that will happen.

Walter K I had no clue about the high diving horse issue. From what I remember and probably you and Cindelphila remember those horses were treated great. These animal right activists need to get a damn life. They were the cause of the Ringling Bros circus folding. UGH

walterk, you back in jersey?

markP you remember the Steele Pier?

markp, I'll be around for a bit starting the end of next week (21st). Hopefully you won't be so tied up with Dunkirk that we'll get a chance to hang out. I'll email you shortly.

Speaking of Dunkirk, I might opt to see it at the Regal, the much nearer alternative for me managed to scratch their print of Hateful Eight by time I got to view it.

Mikeoaklandpark, yes I remember it vaguely from the early 70’s when my parents took me there. walterk, as of now my schedule looks like I will have off all day and night on Saturdays, and Tuesday and Thursday nights. Still not confirmed.

Mikeoaklandpark, yes I remember it vaguely from the early 70’s when my parents took me there. walterk, as of now my schedule looks like I will have off all day and night on Saturdays, and Tuesday and Thursday nights. Still not confirmed.