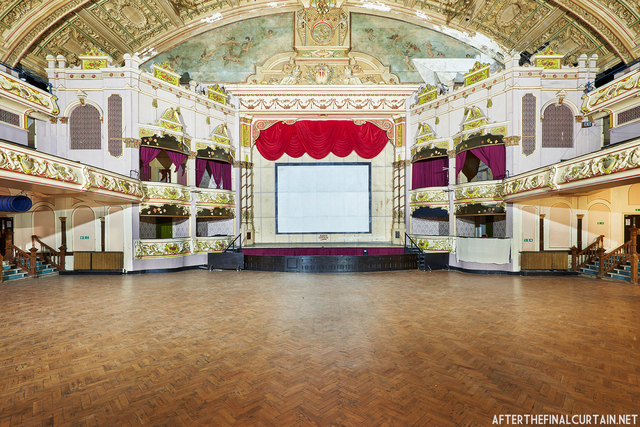 The Victoria Pavilion was opened in 1897 and was designed by the firm of theatre architects Mangnall and Littlewood. This is a beautiful and heavily ornamented Victorian theatre with two horseshoe balconies and eight boxes either side of the proscenium. There were modifications carried out in 1910-1911 which are attributed to famed theatre architect Frank Matcham

The two buildings were advertised as the Victoria Pavilion and the Oriental Ballroom, but on the death of Queen Victoria were renamed the Kings Pavilion and Empress Ballroom.

In March 1909 the property was acquired by William Henry Broadhead of Manchester, well known for his chain of northern music halls.

After the 1914-18 war, the theatre had a policy of showing silent pictures during the winter months, and variety shows in the summer season, as well as catering for such events as the annual Musical Festival. In 1933, a group of local businessmen purchased the block for £24,000, and a new company was formed.

There was a grand opening on 26th March 1934, Mr Smirk travelled thousands of miles to book successful shows. The list of artists who appeared contained household names from stage, screen and radio such a George Formby, and Laurel and Hardy. There were also the big bands of Jack Hilton, Jack Payne, Billy Cotton and Geraldo.

Within months the theatre was opened once more, but as well as the best in variety, there were performances of plays, large musicals, opera and ballet. Appearing were stars such as Flanagan and Allan in a pantomime, Lupino Lane in “Me and My Girl”, and “The Dancing Years” of Ivor Novello.

In 1953, Moss Empires Ltd, the largest live show organisation acquired a controlling interest in the theatre, ballroom, restaurant and the land was occupied by the fairground and car park, (the amount involved was reputedly £146,000). Val Parnell was Managing Director of the Company and the Winter Gardens became part of a huge chain of theatres throughout the country. Moss Empires then leased the property to Trust House Forte (Leisure). The Winter Gardens Theatre can be seen in a later scene in the film “The Entertainer” starring Lawrence Olivier. There is also a scene filmed in the Empress Ballroom, as well as extensive scenes filmed in the Alhambra Palace Theatre in Morecambe.

In 1977, a shock report on the building brought about its closure in September of that year, and the ballroom which was then known as the Dixieland Bar was closed in April 1978. Trust House Forte proposed demolition and the building of a new complex on the site. In response, the Winter Gardens Action Group was formed to campaign to save the theatre. In 1979, the old ballroom was declared beyond repair, but a decision on the theatre was deferred. In 1981, the property was purchased by Tyneside Leisure Company ‘Johnny’s Entertainment’ and in February 1982 the ballroom was demolished.

In 1986, the Friends of the Winter Gardens was formed, and in 1987 English Heritage declared the theatre to be of ‘Outstanding Architectural or Historical Interest’ for grant aid purposes and the building was Grade II Listed.

In 1990, Mr Fred Edmondson bought the theatre, and in 1992 English Heritage and Lancaster City Council upgraded the building to Grade II* Listed, being of outstanding national importance.

In 1995 Building at Risk Trust acquired the building and in October 1996, restoration work got underway. A year later, Friends changed their name to Friends of the Victoria Pavilion and were granted charitable status.