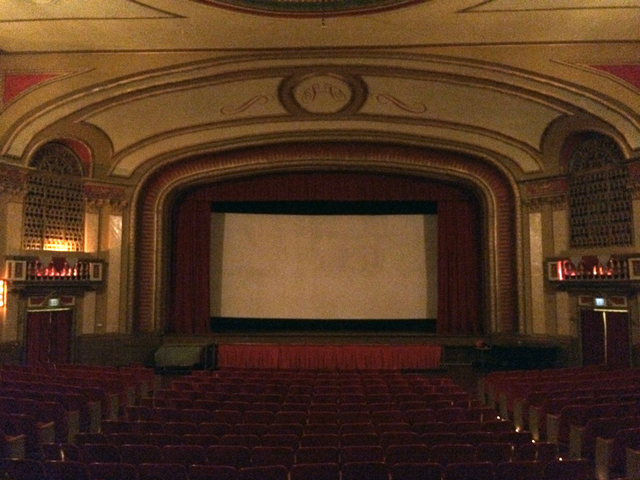 Opened February 15, 1924, the Hoosier Theatre shared a three-story building with the Illiana Hotel (now apartments) and storefronts. It could seat around 650 and originally featured both vaudeville and movies. It was equipped with a Kimball organ, which was opened by organist John Muri.

In 1963, the 4 Manual 28 Ranks Wurlitzer organ from the massive Uptown Theatre in Chicago was moved into the Hoosier Theatre but it was never installed and eventually shipped to California where it has been restored.

In 1987, the theatre was added to the National Register of Historic Places.

Now refurbished, and still a single-screen movie house with a huge, two-story tall screen (one of the only classic movie theatres still in operation in all of Northwestern Indiana), the Hoosier Theatre now seats just over 600, and screens both first-run and classic films, as well as hosting the occasional concert or other live entertainment on its stage. Since October 2017 it has been equipped with an elecronic organ to accompany silent movies.

I have a few exterior pics of this gem.

Here is a most illuminating link describing the long history of the Hoosier:
http://tinyurl.com/s7q8y

The Hoosier closed in December 1959 for an unspecified period. An article in the Hammond Times, excerpted here, mentions three other Whiting theaters, the Star, Princess and Capitol.

Oil City Once Had 4 Showhouses

Closing of Whiting’s Hoosier theater, the city’s only remaining theater and an entertainment center in the Oil City for the last 35 yearsâ€"because there just wasn’t enough revenueâ€"opens the door to a past, brilliant with its glitter of stars, both in the vaudeville and movie worlds.

Although of late movies played to more empty seats than filled ones at the Hoosier, former stage manager William Schulte recalls the days when people lined up outside waiting to get in to see such hits of the past as “Birth of a Nation”, “What Price Glory” and others.

When the Hoosier theater opened its doors in 1924 it was under the ownership of Jack and Margaret Bennett, who prior to construction of the Hoosier had operated the Princess theater near the new show place. In 1929 the Hoosier was taken over by Warner Brothers, with Mrs. Bennett and a new partner, Roy Green, Whiting attorney, as operators.

Passing of the Hoosier theater temporarily or permanently, brings to a close a Whiting theater era that had its start shortly after the coming of Standard Oil Co. refinery to the town in 1889. The Star theater on 119th Street near New York Avenue was recognized as the first “modern” movie house in Whiting, although there had been one earlier place that catered to the public in the early history of movies. Opening of the Princess theater, also on 119th street, near Sheridan Avenue, and west of the Star, gave the Oil City two theaters.

For a short time Whiting was a town with four theaters. The town enjoyed this distinction when the Capitol theater, on 119th Street near LaPorte Avenue, opened its doors, Hoosier came into existence about a year laterâ€"and the Star and Princess theaters were still operated by the owners of the new Capitol and Hoosier theatersâ€"A. J. Obresk and Margaret Bennett, respectively. Both Obresk and Mrs. Bennett are now dead.

This house was advertising as the Hoosier Auditorium Theatre in the March 2, 1969, issue of The Hammond Times. It was open Friday through Sunday evenings with a double feature of Thunderball and From Russia With Love, plus a separate kids' matinée on Saturday featuring Tammy and the Millionaire.

The link with the Hoosier Theatre’s history that kencmcintyre linked to is dead, but I think it might be the same document that is available in a pdf file here. There’s no date on it, but it was published after the house had been refurbished and reopened by John Katris.

The Hoosier’s web site indicates that they show quite a few first-run features, so pat of our description is out of date. The current movie is The Book of Life, which was released on October 17.

Long term plans for the Hoosier include adding a second screen in adjacent store space and another screen in a new building to be erected on the vacant lot next door. Eventually, plays will sometimes be mounted on the stage of the original theater.

The “Theatre History” page of the Hoosier’s web site also says this: “A fully installed six-rank pipe organ, collected from various theater venues in the Chicago area, offers another opportunity for live music. Katris is looking for someone to play it.”

Here is an article about the Hoosier Theatre from 2005.

Update/correction on the organ:The pipe organ is inoperable. An electronic organ has been installed since Oct.2017. It is used for silent films;the most up to date information about which may be found on their facebook page.